A man who was abducted by aliens returns to his family three years later, but his presence affects them negatively.

We all have those films that have passed us by, this was one for me, I knew of it but just had never got round to actually watching it.

When it comes to Horror and Sci-Fi together I’m admittedly a very hard person to please, maybe it’s because my first Sci-Fi/Horror was “Alien”, maybe it’s because I’m only a fan of certain Sci-Fi, maybe it depends on how much Horrors involved, maybe it’s a mixture of it all? I don’t know why but I’ve always been this way.
I’d heard bits and pieces about this film, that it was a b-grade movie, that it was strange, that it was great, that it was horrible and I’d seen the odd still. I decided it was finally time to hunt this film down and get it watched before it slipped me by once again and I’d never get round to watching it at all.

The first thing I’d like to mention is the films atmosphere, just wow, from beginning to end it makes you feel seriously uncomfortable. Whether it’s the near constant synthesized music played throughout or the strange and surreal script, whatever it is it gives you an uneasy and unpleasant feeling, just like a Horror film should do.

For me this feature is a great balance of Horror and Sci-Fi, sure it’s obviously a lower budget film but what it lacks in budget it more than makes up for in it’s creativity. At times it’s highly disturbing and for a film that’s over 35 years old that’s very impressive, kudos are in order to Writer and Director Harry Bromley Davenport. 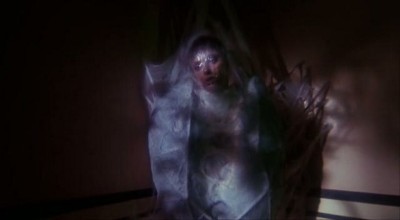 Sure “Xtro” is dated and ocourse it hasn’t really aged well but it still makes for some eerie viewing, I wish I’d have watched it all those years ago but maybe I wouldn’t have appreciated it like I do now.
If you want to see the “Xtro” trailer then just click on the video below:
Miscellaneous facts about the film:
The creature that attacks the woman in the cottage was played by a mime they hired to crawl on his back.
Director Harry Bromley Davenport humorously described his score for the film in an interview as “screaming synthesizers.”
The film was often incorrectly listed as a UK video nasty though it was never officially listed among the original 72 titles.
Even though the plot involves extraterrestrials, the creatures in this film are at no point referred to as aliens. Some fans like thinking of them as Lovecraftian-type beings. It’s also never said they come from another planet, so it’s possible they come from another dimension.
A DVD release says in the synopsis that Sam Phillips is a scientist. However, this isn’t mentioned anywhere in the movie at all.
Film debut of Maryam d’Abo.