H.P. Lovecraft, the well-known horror writer, is looking for the book ‘Necronomicon’. He finds it guarded by monks in an old library. He then copies some stories from it, which unfold for our eyes – and his…

Trying to translate Lovecraft’s work to the big screen has been a challenge for film makers for many years.

Some films have managed to do so with some success whilst others have failed miserably. Personally, in my opinion, this is one of the rarities that actually managed to bring Lovecarft’s work to life without diluting it too much or trying to dumb it down, which I’ve seen a lot of.
This film does the stories in an anthology style which really works as it manages to tell the story it wants to without trying to stretch it out too far and the stories themselves are really entertaining, there’s only 3 (4 with he wraparound) but each one gets the time and attention it deserves.

The entire cast and crew deserve a huge kudos, the film flows really well and where sometimes there can be a ‘too many cooks’ thing going on it seems to work here and everyone seems to be on the same page with the end product of the feature. It blends so well that you’d be forgiven it was all done by one director, let alone three.
Unfortunately the film has obviously aged and I don’t see it as a feature that will grab today’s audiences and it seems to have been forgotten by some over the years but it’s one that I still find really entertaining and love to watch regularly, plus what Horror fan doesn’t love a Jeffrey Combs appearance?! 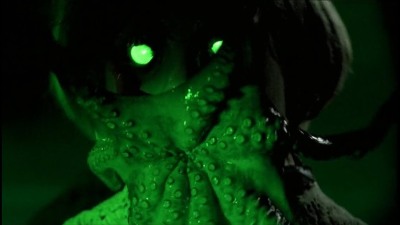 “Necronomicon: Book Of Dead” is a film I highly recommend, obviously for fans of H. P. Lovecraft, but also for someone who is after something a bit different than the norm, even 26 after its release I’ve yet to see something to compare it to.
If you want to see the “Necronomicon: Book Of Dead ” trailer then just click on the video below:
Miscellaneous facts about the film:
Director Shûsuke Kaneko did not speak any English at the time of filming his segment with an all American cast.
The fountain pen you see Lovecraft using to make his notes on the Necronomicon is a Sheaffer Calligraphy.
At approximately the 37:30 minute mark (during “The Cold”) some violin/synth cords are played as a part of the score. This tune is identical to the closing credits music of the TV show Dexter. Daniel Licht composed both scores. Dexter was released 13 years after Necronomicon.
Melinda Clarke was originally offered the role of Sarah.
Jeffrey Combs was hesitant about portraying Lovecraft on film. “I don’t look like Lovecraft” he commented, but makeup made him look like Lovecraft as best as they could. He also wasn’t particularly fond of the direction they went with his rendition. There are shots where the makeup worn by Combs greatly resembles actor Bruce Campbell, right down to the scar on his chin.