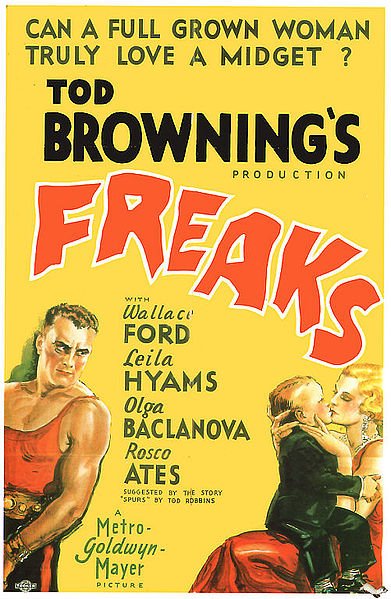 A circus’ beautiful trapeze artist agrees to marry the leader of side-show performers, but his deformed friends discover she is only marrying him for his inheritance.

When it comes to black & white films, today’s generation don’t seem to want to know, which is a shame because they are missing out on a-lot of classics, including this, Tod Browning’s classic pre-code Horror “Freaks”. For this film Browning drew on his own personal experiences from when he was in a travelling circus in his younger years. In the film, the physically deformed “freaks” are inherently trusting and honorable people, while the real monsters are two of the “normal” members of the circus, which I find is still a good way to look at society today.

The original casting for this film had Victor McLaglen as Hercules, Myrna Loy as Cleopatra, and Jean Harlow as Venus. All balked at the prospect of co-starring with “sideshow exhibitions”.
On a personal note, this is a film truly hold close to my heart, it helped me through a-lot of hard times when I was a teenager, but coming from a film that’s nearing its 80th anniversary that’s saying a-lot!

This film is a TRUE classic from a golden era. It was controversial for it’s time, which might seem silly today but times were different back then. It still holds up to today’s films and it’s a film I will always cherish.

Don’t let the fact it’s in black and white put you off, like I said it’s a TRUE classic and a must-watch for fans of Horror or even anyone who just want a good story. It’s creepy, entertaining and yes still shocking!
To see the trailer for “Freaks” click here
Miscellaneous facts about the film