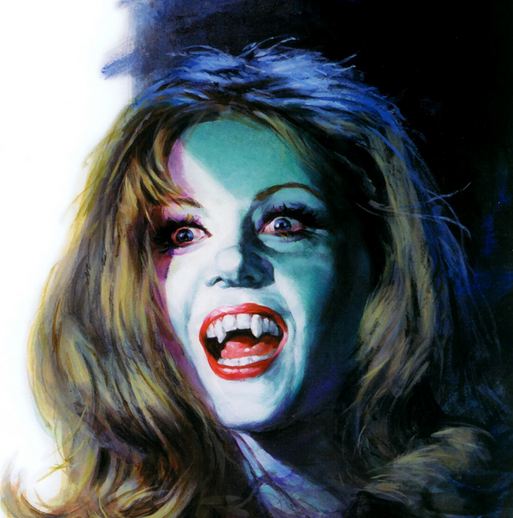 That’s right, this month Hammer Horror beauty, Ingrid Pitt, is my icon of the month.

Pitt was born Ingoushka Petrov in Warsaw, Poland, to a German father of Russian descent and a Polish Jewish mother. During World War II, she and her family were imprisoned in a concentration camp. She survived; and, in Berlin in the 1950s, married an American soldier and moved to California. After her marriage failed, she returned to Europe; but, after a small role in a film, she headed to Hollywood where she worked as a waitress while trying to make a career in the movies. Her natural hair colour was brown, though she frequently lightened it to blonde.

In the early 1960s, Pitt was a member of the prestigious Berliner Ensemble, under the guidance of Bertolt Brecht’s widow Helene Weigel. In 1965, she made her film debut in “Doctor Zhivago”, playing a minor role. In 1968, she co-starred in the low-budget science fiction film “The Omegans” and, in the same year, played ‘Heidi’ in “Where Eagles Dare” opposite Richard Burton and Clint Eastwood.

She then appeared as ‘Queen Galleia’ with Jon Pertwee and Roger Delgado in “The Time Monster”, which was the fifth Serial of the ninth season of “Doctor Who”. Her exotic looks and eastern European accent came to the notice of Hammer executives who cast Pitt as vampiress “Mircalla” in the sensual horror thriller “The Vampire Lovers” (1970), based on Joseph Sheridan Le Fanu’s novella “Carmilla”. The film was a box office success with its blend of horror and sexual overtones.

Next up, Pitt was cast by Amicus Productions as another gorgeous vampire in the episode entitled “The Cloak” in the superb “The House That Dripped Blood” (1971). This time, Ingrid played an actress appearing in horror films alongside screen vampire Jon Pertwee. Ingrid donned the fangs again for her third vampire film in a row, “Countess Dracula” (1971) which was loosely based around the legend of the 16th century bloodthirsty Countess Elizabeth Bathory. Whilst not as successful, as the two prior outings, Ingrid Pitt had firmly established herself as one of the key ladies of British horror of the 1970’s. 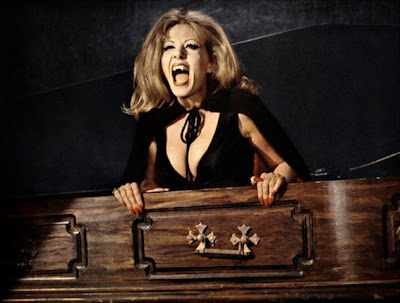 She then appeared in a small role in the classic “The Wicker Man” (1973) as an uncooperative civil servant annoying Edward Woodward in his search for a missing child. Also In the mid-1970s, she appeared on the judging panel of the British ITV talent show “New Faces” and other shows such as “The Zoo Gang” and “Thriller”.

She then disappeared off our screens for nearly 6 years until 1981 when she returned to mainstream television. Her role as Fraulein Baum in the 1981 “BBC Playhouse: Unity”, who is denounced as a Jew by Unity Mitford, was uncomfortably close to her real-life experiences. She made a return to film with appearances in “Artemis 81”, “Who Dares Wins” and “Smiley’s People”.

She also made a return to “Doctor Who” in the three part story “Warriors Of The Deep” as ‘Dr. Solow’. During this time she was receiving less and less work offers (She appeared in 6 more films throughout the 80’s) so she turned to her other talent, writing. Pitt’s first book, after a number of ill-fated tracts on the plight of Native Americans, was a novel, “Cuckoo Run”, a spy story about mistaken identity. She stated “I took it to Cubby Broccoli. It was about a woman called Nina Dalton who is pursued across South America in the mistaken belief that she is a spy. Cubby said it was a female Bond. He was being very kind.”

This was followed in 1984 by a novelisation of the Peron era in Argentina (“The Perons”), where she lived for a number of years: “Argentina was a wild frontier country ruled by a berserk military dictatorship at the time. It just suited my mood.” Also In 1984, Pitt and her husband Tony Rudlin were commissioned to script a “Doctor Who adventure”. The story, entitled “The Macro Men”, was one of a number of ideas submitted by the couple. The plot concerned events surrounding the Philadelphia Experiment – the urban legend about a U.S. Navy experiment during World War II to try to make the USS Eldridge destroyer escort invisible to radar. It involved ‘The Doctor’ and companion Peri arriving on board the ship in 1943 in the Philadelphia Naval Shipyard and becoming involved in a battle against microscopic humanoid creatures native to Earth but previously unknown to humankind. The couple had several meetings with script editor Eric Saward and carried out numerous revisions, but the story progressed no further than the preparation of a draft first episode script under the new title The Macros.

It was at this time that the theatre world also beckoned. Pitt founded her own theatrical touring company and starred in successful productions of “Dial M for Murder”, “Duty Free” (aka “Don’t Bother To Dress”), and “Woman Of Straw”. Once again she went off the radar again, this time for nearly ten years. She mainly made appearances at Horror conventions and film festivals.

In 1998 Pitt was hired by Cradle Of Filth to narrate their album “Cruelty and the Beast”, although her narration was done strictly in-character as the Countess Elizabeth Báthory, as she portrayed in Countess Dracula. Their lead singer, Dani Filth, is known to be an avid Horror fan. She also released a new book, “The Ingrid Pitt Bedside Companion For Vampire Lovers”. 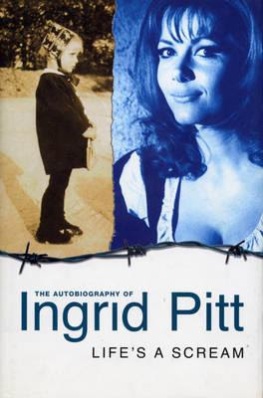 In 1999 she released her autobiography, “Life’s A Scream”, she was short-listed for the Talkies Awards for her own reading of extracts from the audio book but didn’t win. The autobiography detailed the harrowing experiences of her early life: being in a Nazi concentration camp, her search through Europe in Red Cross refugee camps for her father, and her escape from East Berlin, one step ahead of the Volkspolizei. – “I always had a big mouth and used to go on about the political schooling interrupting my quest for thespian glory. I used to think like that. Not good in a police state.”

In 2000, Pitt made her return to the big screen in “The Asylum”, starring Colin Baker and Patrick Mower and directed by John Stewart. In the same year she also appeared in the Horror short “Green Fingers”. It became obvious amongst fans that Pitt was coming towards the end of her acting career as her parts became more sporadic, she spent more time on the convention circuit alongside fellow actresses such as Caroline Munro. She also released another book entitled “The Ingrid Pitt Book Of Murder, Torture & Depravity”. 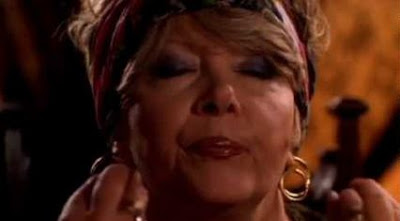 Pitt’s credentials for writing about ghosts spring from a time when she lived with a tribe of Indians in Colorado. Sitting with her baby daughter, Steffanie, by a log fire, she was sure that she could see the face of her father smiling at her in the flames. – “I told one of the others and he went all Hollywood Injun on me and said something like ‘Heap good medicine’. I guess he was taking the mickey.”

Other writing projects include a different look at Hammer Films entitled “The Hammer Xperience”. She also wrote a story under the pen name Dracula Smith, which was illustrated within the Fan club magazine. Pitt wrote regular columns for various magazines and periodicals, including “Shivers Magazine”, “TV & Film Memorabilia”, “Monster-Mania: The Magazine” and “Motoring and Leisure”. She also wrote a regular column, often about politics, on her official website, as well as a weekly column at UK website “Den of Geek”. She also continued to write books, mainly based on Horror themes.

After a period of illness, Pitt returned to the screen in 2008 for the Hammer Films-Mario Bava tribute, “Sea Of Dust”, starring alongside fellow Horror favourite Tom Savini. Unfortunately it would turn out to be her last appearance on screen. Not long after Avalard Publishing acquired the rights to her first novel “Cuckoo Run” and a number of other previously unpublished titles, including “Annul Domini: The Jesus Factor”, a speculative novel about what would have happened if Jesus had never made it to Jerusalem. Also Pitt’s original novel “Dracula Who…?” was released in limited edition by Avalard alongside the script for the un-produced film version. “Dracula Who…?” saw the return of Countess Dracula, a role Ingrid had played on screen for Hammer Films.

To Pitt’s surprise her “Doctor Who” adventure story, entitled “The Macro Men”, which she wrote in 1984 was released by Big Finish Productions as “The Macros” in their “Doctor Who: The Lost Stories” audio releases.

Pitt carried on doing Horror conventions, unfortunately it was on her way to a birthday dinner hosted by members of her fan club that she collapsed. Sadly after a few days, on 23 November 2010, she died in hospital. The cause of death isn’t known, although her daughter, Steffanie Pitt, said her mother had been in poor health. Pitt married three times: Laud Roland Pitt Jr, an American GI; George Pinches, a British film executive; and Tony Rudlin, an actor and racing car driver. Her daughter, Steffanie Pitt-Blake, is also an actress. She had a passion for World War II aircrafts. She held a student’s pilot licence and a black belt in karate

Seven months before she died, Pitt finished narration for “Ingrid Pitt: Beyond the Forest” (2011), an animated short film on her experience in the Holocaust, a project that had been in the works for five years. Character design and storyboards were created by two-time Academy Award-nominated filmmaker Bill Plympton. The film is co-produced and co-written by Dr. Jud Newborn, Holocaust expert and author, “Sophie Scholl and the White Rose” and drawn by 10-year-old animator, Perry Chen.

“They tell me that I am more beautiful now than when I was making films a quarter of a century ago. All lies, of course, but sweet.” – Ingrid Pitt 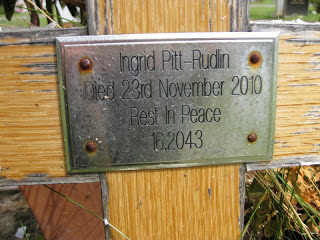