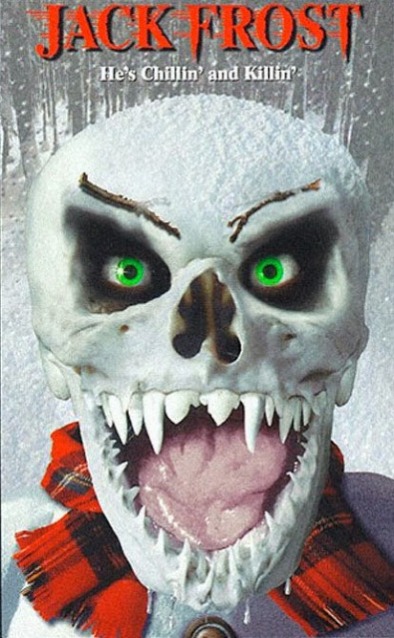 A serial killer dies, comes back as a snowman, and wreaks havoc.

Yes I know it sounds silly but that doesn’t mean it’s a bad film.

Now I usually take my Horror seriously but every once in a while a film comes along that reminds you that sometimes you have to step back and enjoy things for what they are, this film is one of them.
I remember buying “Jack Frost” for £1 in a bargain shop, I was in the mood for something so bad it was good and would make me laugh with funny death scenes. Sometimes you get more than you bargained for and I more than certainly did.

Now usually a rape scene is no laughing matter, it’s actually a very serious thing. But when you’re sat there watching Shannon Elizabeth being raped by a killer snowman in the bath you can’t help but burst out laughing, I never thought I’d find myself laughing at such a serious situation like that.
The film has some fantastic and hilarious death scenes, the acting from the cast is so over the top but it works fantastically well for the film, it just adds to it’s b-movie hilariousness.

“Jack Frost” is a fun film, just don’t take it too seriously and you’ll have tears running down your face with laughter.
If you want to see the “Jack Frost” trailer then just click on the video below:
http://youtube.googleapis.com/v/5JpO7iLAohQ&source=uds