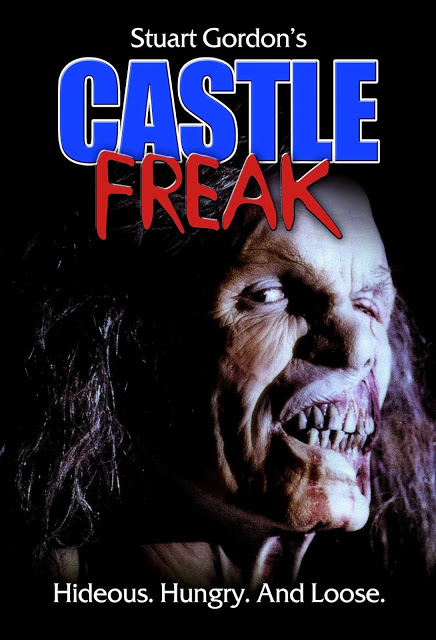 A troubled couple and their blind daughter come to Italy to visit a 12th Century castle they’ve inherited.

The 90’s was a strange time for the Horror genre but it wasn’t all bad.

When you watch a film by Stuart Gordon you certainly know what to expect and this feature is no different, that ain’t a bad thing either.
Once again Gordon takes influence from a Lovecraft story and makes it his own, plus reuniting  Jeffrey Combs and Barbara Crampton on screen again is always bound to please Horror fans.

Apparently the cast and crew gathered before filming started to brainstorm on what they felt was terrifying in a film, they used these suggestions to add to the direction of filming.

The film gets a lot of flack due to it being a “Full Moon” production, for me this film was onto a winning formula with everyone that was involved.

Give “Castle Freak” a try, it’s so underrated it’s criminal.
If you want to see the “Castle Freak” trailer then just click on the video below:
Miscellaneous facts about the film:
The castle used in the film is an actual Italian castle owned by the president of Full Moon Pictures, the distribution company.
This film is a running joke on the popular podcast ‘The Flop House.’ The film was the source of a year-long controversy, dubbed by fans as ‘Ding-Dong Gate,’ centered on co-host Stewart Wellington’s insistence that Giorgio rips off his own genitals. The debate was seemingly put to rest when actor Johnathon Fuller, who plays the titular castle freak, wrote in to the show to confirm that no, Giorgio did not rip off his own ding-dong. Regardless, the film is referenced nearly every episode of the podcast, alongside two other Wellington favorites, “Head of the Family” and “The Invisible Maniac.”
The first Full Moon film to be released outside of Paramount.
Was originally slated for a Halloween 1994 theatrical release before being pushed to DTV release in November of 1995.
The film was also originally set to be released through a planned but cancelled sub-label of Full Moon called PulsePounders, named after a film Full Moon CEO Charles Band produced and directed during the 1980s at his previous studio, Empire International in Rome, Italy. The would-be sub-label was intended to be created for releasing extreme & unrated horror films, but the label ended up being used as the name of a “KidVid” label Band created in the mid-to-late 1990s, after his Moonbeam Entertainment sub-label for kids folded.
The “freak” prosthetics and makeup took 6 hours to apply each day.
The film was blessed by the Vatican for fears of the effect on its viewers.
Real brain matter was used for the climax of the film.
Was also bumped from Halloween 1995 video release.
Filmed in a mansion owned by Producer Charles Band, the crew had to quickly clean blood and guts from the floors and the walls when a Band family reunion was to take place there.