Five campers are stalked and killed in the mountains after traveling there to examine property they had purchased.

There are some films that always manage to slip under the radar no matter what, this film is a great example of that. 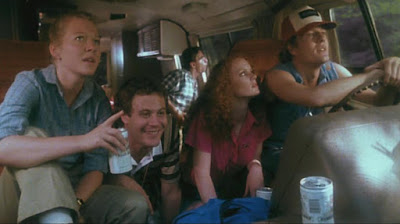 The 80’s was the decade of the “Slasher” movie and we got an absolute ton of them, because of this some films just slipped between the cracks and have long been forgotten about except by a few.
It’s a shame really because some of these features are fantastic pieces of work but at least Horror fans have the fun of stumbling across movies like this, which is admittedly quite a rarity.

The plot of the film may seem old now but don’t let that put you off, it’s story is told incredibly well and paces itself out enough to add true tension and with a great score to boot adds for a great atmospheric feature.

The cast also do a great job, Deborah Benson who plays the lead lady does a marvelous job of grabbing your attention as do the rest of the cast as well, it’s not as two dimensional as what you’re used to .

“Just Before Dawn” is a true Slasher gem, if you’re a fan of this sub-genre then do yourself a favour and get it watched.
If you want to see the “Just Before Dawn” trailer then just click on the video below:
Miscellaneous facts about the film:
Director Jeff Lieberman cites Deliverance (1972) as the film’s primary influence.
While shooting in the woods one evening the lighting went out without explanation, leaving the cast and crew in total darkness. After several minutes the frustrated producer yelled out, “Let there be light!’–and, sure enough, the lights did indeed come back on. It was never determined why they went out or why they came back on again.
Director Jeff Lieberman said that countless strangers showed up at the filming location on the day that the scene of Jamie Rose swimming topless was to be filmed. Lieberman said that word of this shoot had apparently gotten out among the local forest rangers.
According to director Jeff Lieberman, despite numerous reviewers who have stated that the film was inspired by The Texas Chain Saw Massacre (1974) or The Hills Have Eyes (1977), he had not seen either film when he began shooting this film.
The title of the original screenplay was “The Last Ritual”. It was changed after the script’s heavy religious theme was axed and the story was rigorously revised.
Richard Kiel was auditioned for the role of the film’s dual killers.
According to director Jeff Lieberman, the film was almost picked up by Universal Pictures for release. Unfortunately, business issues with the distribution company prevented it from happening.
The film’s German release title is ‘Blutige Dämmerung’, which means ‘Bloody Dusk’ in English.
According to composer Brad Fiedel, many of the ominous sounds in the music score were actually electronically-altered audio clips of himself vocalizing droning noises.
The eerie whistling motif heard in Brad Fiedel’s music score is a reference to the rescue whistle that Warren carries in the film.
Despite its authentic, weathered appearance the ‘old’ church house used in the film was actually built for the production.
The original script included a sixth camper named Eileen, who dies when she is thrown off of a cliff. It also included a climax involving Connie being forced to handle rattlesnakes by the in-bred villains.
An early draft of the script had Jonathan attempting to seduce Merry Kat, instead of Merry Cat flirting with him after putting on Megan’s makeup.
Chris Lemmon was performing a truly dangerous stunt when he was shot clinging to ropes after his fall into the rushing river. Lemmon had to physically hang on to the ropes for some time as the powerful river pulled at him. Only a matter of feet away him was the top of a huge waterfall that was notorious for people falling to their deaths from it..
According to director Jeff Lieberman, in the scene where Ralph Seymour is stabbed, the camera hanging from Ralph’s neck flew upward and smacked the actor in the face as he fell backwards onto the ground. So the expression of pain on his face is very real.