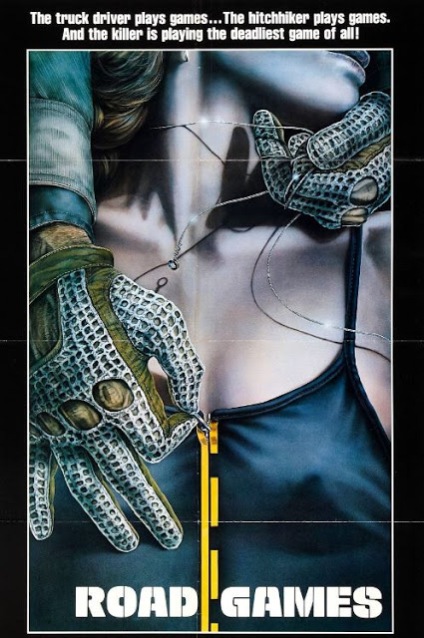 A truck driver plays a cat-and-mouse game with a mysterious serial killer who uses a young female hitchhiker as bait to lure victims on a desolate Australian highway.

Infact Quentin Tarantino has been on record stating this film is his favourite Ozploitation film and I don’t blame him as this flick is easily one of the best of this genre.
I remember watching this film solely because Jamie Lee Curtis was cast in it, after the likes of “Halloween”, “The Fog” and “Terror Train” she was a hot property in the Horror genre.

Director Richard Franklin and writer Everett De Roche give us a highly suspenseful and gripping story that leaves you on the edge of your seat, they deserve more praise for this than what they got.

The film often draws resemblance with Hitchcock’s style, especially with “Rear Window”, to draw any comparison to hitchcock is a huge compliment and one this film rightly deserves.

“Road Games” is a film that’s been somewhat forgotten overtime, that isn’t helped by the fact it’s a rare film to find.
If you want to see the “Road Games” trailer then just click on the video below:

Jamie Lee Curtis said she felt a certain amount of hostility and prejudice while on set, being one of the two “token Americans”. One of the crew members even approached her and asked, “What is it like putting Australians out of work?”

With a budget of 1.8 million Australian dollars, Roadgames was, at the time, the most expensive film to be made in Australia.

In the original script the name of Quid’s dog was suppose to be Bosco. However when Stacy Keach told Richard Franklin that Bosco was actually a chocolate drink in America the name of the dog was changed to Boswell.

Stacy Keach learned to drive a 16-gear semi truck for the role of Quid.

The nickname of Jamie Lee Curtis’ character ‘Hitch’ is a homage to director Alfred Hitchcock, whose films inspired Roadgames.

This film has frequently been compared to Hitchcock’s Rear Window (1954), which isn’t just coincidence. Director Richard Franklin gave writer Everett De Roche a copy of the ‘Rear Window’ script while working on their previous film Patrick (1978). After reading the script De Roche suggested to Franklin that the open highways of the Australian outback would be an ideal place for a similar suspense story. He then proceeded to write ‘Roadgames’.

The story that Quid tells Hitch while camping is actually the true story of that particular filming location. The camp scene was shot at a ruined old telegraph station that used to serve an Australian town that was destroyed by a plague of rabbits many years earlier.

Richard Franklin and Everett De Roche developed the character of Quid with Sean Connery in mind for the part. Of course the film’s budget wouldn’t allow it.

Originally the climax of the film was supposed to be somewhat more elaborate about re-introducing the characters of Frita, Sneezy Rider, and Captain Careful. Originally during the chase through the streets of Perth, Sneezy Rider and Frita were supposed to be randomly wrecked by Quid’s truck, the motorcycle sliding under the trailer in an elaborate stunt. Then Captain Careful was supposed to re-appear towing a new boat only for Quid to destroy that boat too. However pressure to wrap the shoot forced these scenes to be cut from the film.

Quid is towing a “freezer” trailer with a Thermo King refrigeration unit (the “TK” logo can be seen on the trailer in several scenes). These refrigeration units are powered by a separate (and very noisy) engine attached to the trailer the size of a small car engine and they operate basically 24/7 to keep the contents of the trailer close to freezing point. Not once in all the scenes Quid’s truck is parked do you hear the refrigeration operating.

The wire that the killer uses as a weapon in the film is actually a thick guitar string.

The American distributors wanted Richard Franklin to cut the 360 degree pan shot of Quid talking on the phone in the roadhouse. They felt the shot was too long and added nothing to the story. Franklin, however, refused to cut the shot.

The ruins where Quid camps for the night are of the Eucla Telegraph Station near the Western Australia border. It is true that after the rabbit plague in the 1890s the sand dunes encroached on the town and it was abandoned but it was re-established about 4km north at it’s existing site. At it’s peak it had a population of 98 not 700 as quoted by Quid.

In the Gents washroom scene at the roadhouse you can see in several shots behind Quid graffiti on the wall that clearly says “don’t root abos mate”. This has either gone over the heads of the US film crew or left in the final cut as a sick joke. Root is Australian slang for having sex and abo is slang for Aborigine now known as Indigenous Australians.

Quid leaves Melbourne, Victoria one morning and on the same day, after all his mis-adventures, stops at Yellowdine Roadhouse in Western Australia to call the police. This is impossible because Melbourne to Yellowdine is about 3100km or about 1900 miles. Without stopping it takes about 32 hours to drive a truck between these two locations.

All Quid’s encounters with Police are in Western Australia. In 1981 all traffic enforcement was carried out by a separate division formed within the police force called the “Road Traffic Authority”. The cars they used had “RTA” logos on the sides (not POLICE as in the movie). The police cars in the movie also have white on black state of Victoria registration plates. All RTA cars in Western Australia had blue on white WA registration plates with the prefix ‘RTA’ and three numbers.

In the scene halfway through where they stop to use roadside toilets, the men’s room has a sign outside with a picture of Fred from The Flintstones TV cartoons, the ladies’room has one of Wilma.

Although there is a scene with Quid’s truck descending Greenmount Hill at night into Perth with the distinct view of the “City of Lights” (as astronaut John Glenn named it in February 1962) in the background the rest of the movie is filmed in an industrial area of Melbourne, Victoria.

Towards the end of the movie as Quid approaches Perth in Western Australia he passes a sign that reads “Perth 40”. Being 1981 this would mean he was 40 kilometers from the center of Perth. Even in 1981 40km from Perth City was well and truly a built up area with street lights and houses along Great Eastern Hwy yet Quid is clearly still driving in the ‘bush’.

The film’s ending was an afterthought. The distributors wanted the film to have a more shocking conclusion, so the production went back to shoot the final scene at the butcher’s shop. Richard Franklin however, dislikes this ending, feeling that it was too tasteless.