Henry, a drifter, commits a series of brutal murders, supposedly operating with impunity.

There are some films that stay with you forever, seared into your brain. This film is one for me. 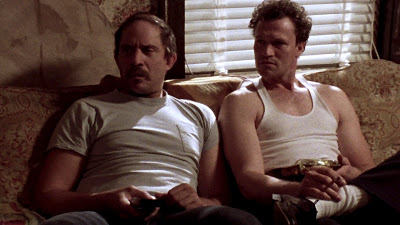 When it comes to true crime films you have to watch them with caution, some people take what they see on screen to be 100% act and whilst there are some films that stick to the facts but really you need to take these films with a pinch of salt when it comes to facts.

This film is a good example of this, this flick features the fabricated crimes that Lucas confessed to happening, this doesn’t make the movie any less disturbing. In fact it makes things even creepier, these either did or didn’t happen as it went unconfirmed, the mystery is unnerving. 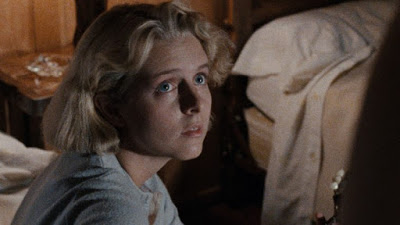 The film itself makes for extremely uncomfortable viewing, something that I and other Horror fans find a rarity. Apparently even some of the crew found the film disturbing to watch, Composer Robert McNaughton couldn’t watch the film right the way through and actor Tom Towles has only ever seen the film once and won’t watch it again.

The acting in the film is top notch, Michael Rooker is one scary motherf….. you get the idea. He oozes intensity and shows the skills that made him a star, this is his feature film debut but watching him you wouldn’t think so. The rest of the cast also do a stand up job, Tom Towles managed to really creep me out in the role of ‘Otis’.

“Henry: Portrait Of A Serial Killer” is not for the faint hearted, weak stomached or easily disturbed. You have been warned.

If you want to see the “Henry: Portrait Of A Serial Killer” trailer then just click on the video below:
Miscellaneous facts about the film:
Actor Michael Rooker remained in character for the duration of the shoot, even off set. He didn’t associate or socialize with any of the cast or crew during the month long shoot, and director John McNaughton made sure Rooker was the only person on set to have a private dressing room. According to costume designer Patricia Hart, she and Rooker would travel to the set together each day, and she never knew from one minute to the next if she was talking to Michael or to Henry as sometimes he would speak about his childhood and background not as Michael Rooker but as Henry. Indeed, so in-character did Rooker remain, that during the shoot, his wife discovered she was pregnant, but she waited until filming had stopped before she told him.
The film was shot on 16mm in 28 days with a budget of $110,000. It initially earned $600,000 on its (extremely limited) theatrical run, but has since gone on to earn millions on VHS and DVD, as well as theatrical re-releases.
The music for the film was mixed in a recording studio in Chicago run by rock n’ roll Christians. According to director John McNaughton, they were quite shocked when they saw the film.
Although the MPAA initially gave the film an X-Rating, this movie, along with Peter Greenaway’s The Cook, the Thief, His Wife & Her Lover (1989) and Pedro Almodóvar’s Tie Me Up! Tie Me Down! (1989), were the main reasons for the creation of the NC-17 rating (an adults-only film which is non-pornographic).
The scene in the living room where Otis (Tom Towles) films Henry (Michael Rooker) and Becky (Tracy Arnold) with the camcorder was completely improvised by the three actors.
Michael Rooker said he was working as a janitor when he auditioned for the part of Henry and went to the audition in his janitor uniform. He got the part, and continued to wear his uniform throughout the film shoot. He only had one jacket, though, so he took it off before he “killed” anyone so he wouldn’t get blood on it.
During its release limbo, tapes circulated around Hollywood which won many roles for Michael Rooker including one in Eight Men Out (1988).
Many of the insults which the TV sales man (Ray Atherton) shouts at Henry and Otis (eg “I can see you’ve had some college”) were improvised on-set by Atherton himself.
Although completed in 1986, the film didn’t get a theatrical release until 1989. It is often mistakenly claimed that this was due to its being tied up in censorship issues with the MPAA, and although this is true to a degree, the majority of the delay occurred because the executive producers, Malik B. Ali and Waleed B. Ali were somewhat underwhelmed by the film turned in by director John McNaughton, and weren’t sure it was even worth their time releasing it on VHS, let alone releasing theatrically. As McNaughton himself says, “they just put it on the shelf”. Several years later, Chuck Parello (who would go on to direct Henry II: Portrait of a Serial Killer (1996)) saw the film and was deeply impressed. Parello was working for the Ali brothers at the time, and he began to lobby them to do something with it. He convinced them to let it be screened at the Chicago Film Festival in 1989, where, after getting a glowing review from the Chicago Tribune’s Rick Kogan, the film was accepted into the 1989 Telluride Festival and subsequently the 1990 Splatterfest Festival, becoming the sensation of both festivals. At this point, the Ali brothers realized they had something unique on their hands and set about promoting the film for theatrical release.
The four murder scenes seen in the first few minutes of the film were all based on real life murders which Henry Lee Lucas claimed to have committed, especially the first shot, where the body of the nude woman is posed in exactly the same position as a victim in a case involving Lucas.
Director John McNaughton and actor Tom Towles both considered the character of Otis to be a comic buffoon, and they consciously presented the character in a darkly humorous manner. Interestingly, Towles, a former US marine, formal training was in improvisational comedy, not dramatic acting.
When the film was submitted to the BBFC for classification in 1990, distributor Electric Pictures removed the shot of the dead woman on the toilet without consulting director John McNaughton because they felt it would predispose the BBFC to look on the film as an exploitation piece and not a serious film.
Actor Tom Towles initially auditioned for the role of Henry, before director John McNaughton asked him if he’d be interested in playing Otis.

The character of Henry is loosely based upon the real life serial killer Henry Lee Lucas. As in the film, Lucas was acquainted with a fellow convict named Ottis Toole (although in the film, the character’s name is only given as Otis). Additionally, Lucas became the lover of Toole’s 11 year old niece, Frieda Powell, who lived with Lucas and Toole for a time and often went under the pseudonym of “Becky” (although in the film, Becky is Otis’ sister, rather than his niece, and is considerably older than Powell was). Also as in the film, Lucas ultimately killed Becky. Furthermore, like the fictional Henry, the real Henry’s mother worked as a prostitute from her house, often forcing him to watch her whilst she had sex, and occasionally making him wear a dress. The real Henry’s father had also lost both his legs in an accident, prior to which he had been a truck driver, just like the fictional character. However, the actions of the fictional Henry are inspired not by Lucas’ real crimes, but by his fabricated ones. In prison, Lucas confessed to over 600 murders, claiming he committed roughly one murder a week from 1975 to 1983. Ultimately however, the vast majority of these claims turned out to be false, whilst many of the rest could not be substantiated one way or the other. Lucas was simply confessing to every unsolved murder brought before him because doing so ensured better conditions for him, as law enforcement officers would offer him incentives to ‘confess’. Such confessions also increased his fame with the public. In the end, Lucas was convicted of eleven murders, and sentenced to death for the murder of Frieda Powell, although his death sentence was later commuted to life in prison by the then governor of Texas George W. Bush.

Unlike Henry in the film, who was portrayed as flying into rages when blatant sexuality was displayed, the real Henry Lee Lucas was known to be rapist and child-molester in addition to a serial killer.