A father and son, both coroners, are pulled into a complex mystery while attempting to identify the body of a young woman, who was apparently harboring dark secrets.

As Horror fans we can be overwhelmed with the genre sometimes and in all honesty that’s when things can become a bit stale. 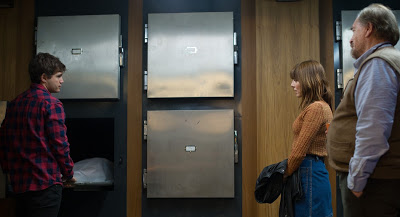 I was at this point, nothing was grabbing me, sure it can still be enjoyable but it wasn’t anything that was thrilling me. Then this film came along and managed to do just that, something that doesn’t happen often enough.

The film itself is a kind of throwback, it’s simplistic and stripped of filler and other nonsense. It’s all about the story and it’s refreshing to see that kind of confidence in a film’s story to put i to the forefront.

As the film progresses the suspension ramps up and it becomes a real attention grabber, the intensity gets close to boiling point. It’s creepy and sometimes makes for uncomfortable viewing which made me love it more

The acting is fantastic, Emile Hirsch does a stand up job, Olwen Catherine Kelly also manages to draw you in despite not uttering a word and Brian Cox, well he shows us why he’s considered one of the greatest, he was perfect for the role.