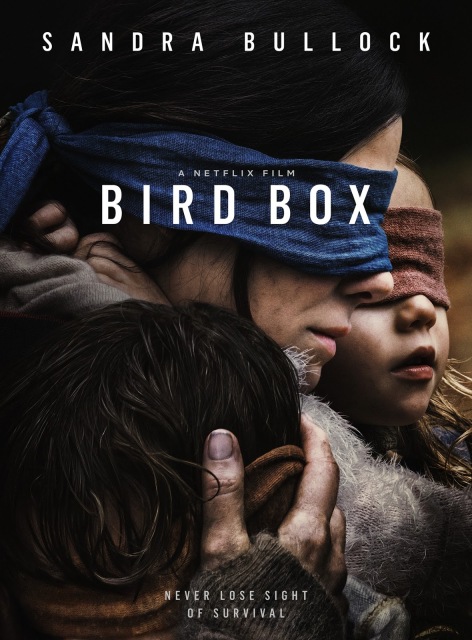 Five years after an ominous unseen presence drives most of society to suicide, a mother and her two children make a desperate bid to reach safety.

Well once again Netflix has got the internet buzzing away about one of its releases, curiosity got the best of me and I wanted to see what all the talk was about.

I must admit that I’ve never been a big fan of Sandra Bullock, I’ve got nothing against her, it’s just that her work has never really done anything for me. The fact she was cast as the lead didn’t deter me in anyway, in fact I was hoping she may be able to offer me something different than what I was used to seeing from her.
There were also some great casting choices with Sarah Paulson (who is a favourite of mine), John Malkovich and BD Wong. Along with other cast members, Machine Gun Kelly for instance, the film certainly has an eclectic line up that is a bit of a puzzler. I’ll try my best to do the rest of the review without any spoilers.

Whilst the film had a strong and promising start I quickly lost all interest, we’re thrown in with a group of irrelevant characters that act without motive and thus begins the films mighty downfall and it never picks up again. The only thing that kept it going was the strong acting performances, talk about a huge waste of potential.
As the film progressed and the plot holes became bigger, I found myself extremely puzzled as to why there was so much hype about this feature. I kept thinking that I was watching a rehashed version of “The Happening” and the ending didn’t help either, talk about a weak finish. You’re left with  far more questions than answers, talk about frustrating. 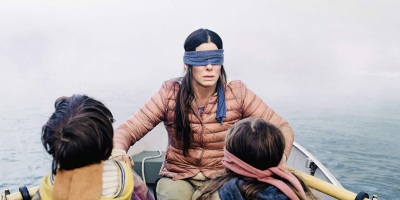 What else can I really say about “Bird Box”? It was a big disappointment and I just don’t understand the hype around it all, it has so much wrong with it that I don’t get how so many people haven’t noticed it.

If you want to see “Bird Box” trailer then just click on the video below:

Sandra Bullock personally asked Sarah Paulson to play her sister in the film.

John Malkovich would talk to the birds on set, and the cast said he had a bizarre connection with them. He would be able to tell them to move their feet and they would.

This movie is based on the 2014 novel “Bird Box” by Josh Malerman.

Sandra Bullock said she was blindfolded for about fifty percent of the shooting schedule.

Author Josh Malerman wrote the rough draft of “Bird Box” prior to the release of the M. Night Shyamalan film The Happening (2008) and the film The Road (2009).

This was the second collaboration between actresses Sandra Bullock and Sarah Paulson, following Ocean’s Eight (2018).

When the film was first being developed, Sandra Bullock and director Susanne Bier both originally passed on the project.

Charlie mentions that the situation they are in is not like some kids running around in a maze. This is a nod to “The Maze Runner” series, in which Rosa Salazar (Lucy) appears.

According to an article by Helen Bushby, director Susanne Bier “suffered ‘sleepless nights’ after Sandra Bullock refused to cut holes in the blindfold she wore for the horror thriller film.”

The opening scene with Sandra Bullock and Sarah Paulson shows the two playfully calling each other “Dum Dum.” The song playing within this scene is “Coming Down” by Dum Dum Girls.

This is not actor Pruitt Taylor Vince’s first appearance in a post-apocalyptic show, he previously played Otis on The Walking Dead (2010). Interestingly his character’s name in this film, Rick, is the name of the main character in The Walking Dead, Rick Grimes.