A group of people stop by a mansion during a storm and discover two magical toy makers, and their haunted collection of dolls.

Who doesn’t love killer dolls?! Well if you don’t then why the hell are you reading this?

Admittedly these films aren’t for everyone, it requires a strange sense of humour and not having to take every Horror film seriously. Luckily I love films like this and this one doesn’t disappoint.
The film is brought to us by Stuart Gordon who also gave us such films as “Re-Animator”, “From Beyond” and “Castle Freak”, his style is adamant here and it suits this film perfectly.

The stars of the flick are obviously the dolls themselves, they’re so entertaining but personally I don’t think there anywhere near as amusing as the puppets from “Puppet Master” but still they’re good enough. Talking of “Puppet Master” we see an appearance from the legendary Guy Rolfe, as always he puts in an amazing performance.
Effects maestros Giancarlo Del Brocco, John and Vivian Brunner and David Allen did some amazing work though, with tons of stop-motion and mechanics. It’s all in the details and they definitely didn’t leave anything out and made sure it was all above par. 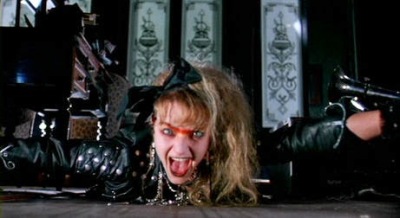 “Dolls” is tons of fun to watch, a great film to view with a few friends and a few beers.
If you want to see the “Dolls” trailer then just click on the video below:
https://youtube.googleapis.com/v/1hjKgWyCt4I&source=uds

Stuart Gordon was, at one point, very interested in directing a sequel to this film. The initial storyline would have followed Judy and Ralph back to Boston, where Ralph would have indeed married Judy’s mother and they would all become a family. One day Judy would receive a box sent from England that would contain the toy makers, Gabriel and Hilary, as dolls.

For the scenes in the attic, Carolyn Purdy-Gordon portrayed the character of Isabel. Bunty Bailey had already been let go by the time the attic sequences were shot.

This film was actually shot before Stuart Gordon’s next film, From Beyond (1986), and was shot on the same sets, but released almost a year afterwards due to all the doll effects in post-production.

Guy Rolfe had to bleach his hair white for this film. He wasn’t particularly happy when his hair originally came out yellow.

The close-up shot of Enid grabbing her “Boy Toy” belt was actually Carolyn Purdy-Gordon’s niece filling in for Cassie Stuart, who was not available at the time for the shoot.

The whispering sounds of the dolls were done by a group of Stuart Gordon’s friends and family, including his kids and his wife, Carolyn Purdy-Gordon.

Because Empire Pictures wanted the film to be more like Stuart Gordon’s previous film, Re-Animator (1985), additional gore footage was shot for the death of Rosemary. One shot was filmed where one doll used a pitchfork to pull out some of her intestines. The footage was eventually scrapped when the film-makers decided that the scene didn’t really fit the tone of the film.