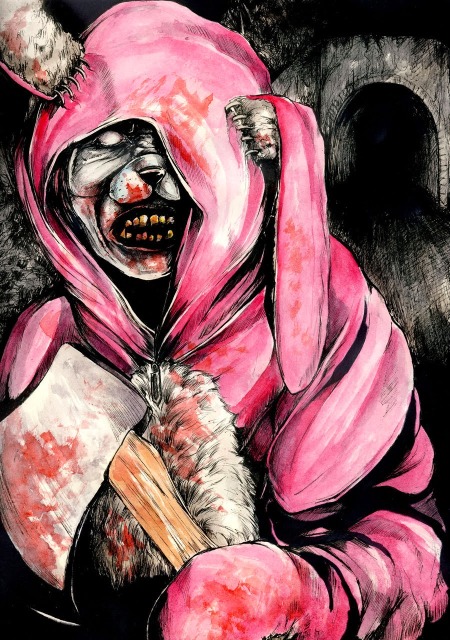 The Bunny Man is an urban legend originated from two incidents in Fairfax County, Virginia, in 1970, but has been spread throughout the Washington D.C. area.

There are many variations to the legend, but most involve a man wearing a rabbit costume who attacks people with an axe. 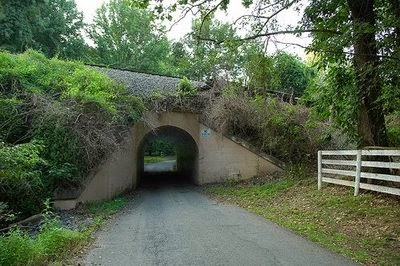 Fairfax County Public Library Historian-Archivist Brian A. Conley conducted extensive research on the Bunny Man legend. He has located two incidents of a man in a rabbit costume threatening people with an axe. The vandalism reports occurred a week apart in 1970 in Burke, Virginia.


The first incident was reported the evening of October 19, 1970 by U.S. Air Force Academy Cadet Bob Bennett and his fiancée who were visiting relatives on Guinea Road in Burke. Around midnight, while returning from a football game, they parked their car in a field on Guinea Road to talk. As they sat in the front seat with the car running, they noticed something moving outside the rear window. Moments later the front passenger window was smashed and there was a white-clad figure standing near the broken window. Bennett turned the car around while the man screamed at them about trespassing, including “You’re on private property and I have your tag number.” As they drove down the road they discovered a hatchet on the car floor.

When the police asked for a description of the man, Bob insisted he was wearing a white suit with long bunny ears, but his fiancee remembered something white and pointed like a Ku Klux Klan hood. They both remembered seeing his face clearly, but in the darkness they could not determine his race. The police returned the hatchet to Bennett after examination. Bennett was required to report the incident upon his return to the Air Force Academy. 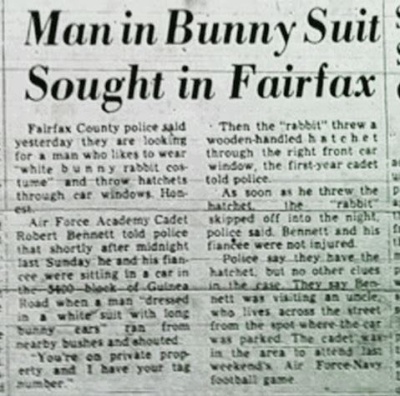 The second reported sighting occurred on the evening of October 29, 1970, when construction security guard Paul Phillips approached a man standing on the porch of an unfinished home in Kings Park West on Guinea Road. Phillips said the man was wearing a gray, black, and white bunny costume and was about 20 years old, 5 feet 8 inches (1.73 m) tall, and weighed about 175 pounds (79 kg). The man began chopping at a porch post with a long-handled axe, saying “All you people trespass around here. If you don’t get out of here, I’m going to bust you on the head.”


The Fairfax County Police opened investigations into both incidents, but both were eventually closed for lack of evidence. In the weeks following the incidents, more than 50 people contacted the police claiming to have seen the “bunny man.” Several newspapers reported the incident of the “Bunny Man” eating a man’s run-away cat, including the following articles in The Washington Post:

In 1973, University of Maryland student Patricia Johnson submitted a research paper that chronicled precisely 54 variations on those two events. 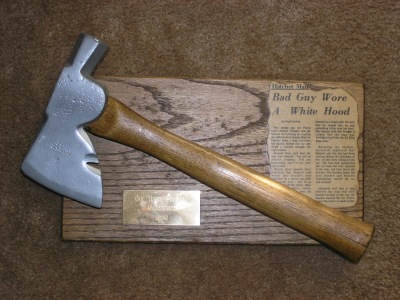 The legend has circulated for years in several forms. A version naming a suspect and specific location was posted to a web site in the late 1990s by a “Timothy C. Forbes”. This version states that in 1904, an asylum prison in Clifton, Virginia was shut down by successful petition of the growing population of residents in Fairfax County. During the transfer of inmates to a new facility, the transport carrying the inmates crashed; some prisoners escaped or were found dead. A search party found all but one of them.

During this time, locals allegedly began to find hundreds of cleanly skinned, half-eaten carcasses of rabbits hanging from the trees in the surrounding areas. Another search of the area was ordered and the police located the remains of Marcus Wallster, left in a similar fashion to the rabbit carcasses hanging in a nearby tree or under a bridge overpass—known locally as the “Bunny Man Bridge”—along the railroad tracks at Colchester Road. Officials name the last missing inmate, Douglas J. Grifon, as their suspect and call him “the bunny man”.


In this version, officials finally manage to locate Grifon but, during their attempt to apprehend him at the overpass, he nearly escapes before being hit by an oncoming train where the original transport crashed. They say after the train passed the police said that they heard laughter coming from the site. It is eventually revealed that Grifon was institutionalized for killing his family and children on Easter Sunday. 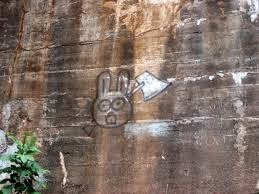 For years after the “Bunny Man’s” death, in the time approaching Halloween carcasses are said to be found hanging from the overpass and surrounding areas. A figure is reportedly seen by passersby making their way through the one lane bridge tunnel.

Conley says this version is demonstrably false. Among other inconsistencies, Conley notes that “there has never been an asylum for the insane in Fairfax County”, that “Lorton Prison didn’t come into existence until 1910, and even then it was an arm of the District of Columbia Corrections system, not Virginia’s.” Court records also show neither a Grifon nor a Wallster. 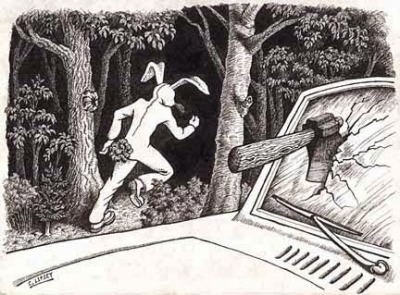 In another version it states that the administration transferred the patients in 1904, during the transfer, some of the patients escaped and hid in the surrounding woods and forestry. These individuals were lost, delusional, and dangerous. Most of them were found, except Marcus Lawster and Douglas Griffin. The local authorities found a trail made by the two men; it was littered with half eaten mutilated bunnies.

The trail led deep into the woods to a tunnel crossing a wide creek. There they found Marcus hanging from the tunnel entrance, with a note attached to his foot. It read, “You’ll never find me no matter how hard you try!” Signed, The Bunny Man; that tunnel has been called Bunny Man Bridge ever since. 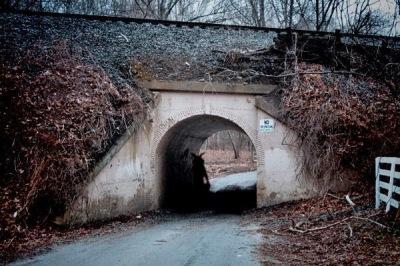 The legend says that if you walk all the way down to the tunnel at around midnight, the Bunny Man will grab and hang you from the entrance of the bridge. Strange deaths and phenomena have constantly been connected with the Bunny Man Bridge. There was a young man from Clifton, Virginia who came upon the bridge while traveling.

Later, he killed his parents and dragged their bodies into the woods to hang them from the bridge, before he killed himself. In 1943, three youths were found dead, hung from the bridge. Their bodies slashed were open and all had notes attached to their feet; all of which stated, “You’ll never catch the Bunny Man!” In 2001, after hearing the tale, six local students and a guide searched the area only to find mutilated bunny parts during their search. They soon left the forest after they heard noises and caught glimpses of figures in the woods. 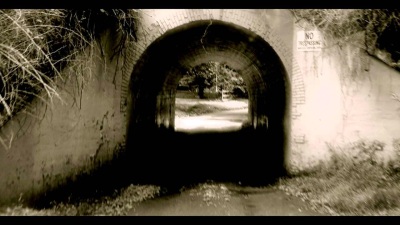 Because of its association with the legend, Colchester Overpass is a popular destination for paranormal enthusiasts and curiosity seekers. Colchester Overpass was built in about 1906 near the site of Sangster’s Station, a Civil War era railroad station on what was once the Orange and Alexandria Railroad. Interest increases around Halloween, and starting in 2003, local authorities began controlling access to the area during that time. During Halloween 2011 over 200 people, some from as far away as the Pennsylvania/Maryland state line, were turned away during a 14-hour traffic checkpoint into the area.

Non-local visitors could be unaware that Colchester Overpass is an active intersection of trains and traffic. The railroad tracks overhead are used by Norfolk Southern Railway, Virginia Railway Express (VRE-Manassas Line) and Amtrak trains. VRE-Manassas Line and Amtrak traffic alone accounts for ninety trains using the overpass each week. In the vicinity of Colchester Overpass, Colchester Road is narrow and windy with limited visibility. In Fairfax County, Virginia, it is illegal to trespass on posted railroad tracks or to loiter in a public roadway. 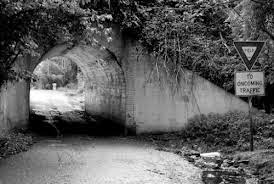 Cryptozoologist Loren Coleman, via his blog Cryptomundo and in the book “Weird Virginia”, which has a section on the Bunny man, sees a direct association between the legend of Bunny man and that of the Goatman of nearby Maryland.

There was a  2011 slasher film called “Bunnyman”, it’s an exploitation-style version of the story. 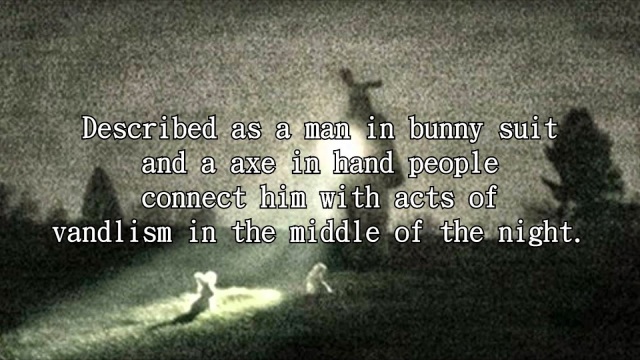 It’s certainly got some gripping stories behind the many legends, but in my opinion it’s just that, a story.