A wealthy, fatherless British clan kidnaps bums and hippies and forces them to participate in an elaborate role-playing game in which they are the perfect family; those who refuse or attempt escape are ritualistically murdered.

By 1970 Director Freddie Francis had already made a name for himself in the Horror business by directing films for the likes of Hammer and Amicus, his name became a draw for fans of the genre.
With a background in Cinematography as-well his films were like pieces of art come to life and he gave us some amazing shots, as evidenced in this release.

Mixing traditional dark British Humour with Horror aspects it makes for fun viewing, quite unique for it’s time and it as aged quite well for a 45 year old film. It has a feel of 1967’s “Spider Baby” to it, which isn’t a bad thing.
There’s not one bad casting choice but Vanessa Howard is the standout star, she makes the title role her own and gives us a highly memorable performance. 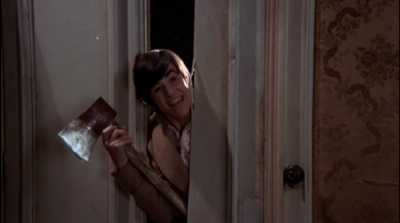 “Girly” is what became the stereotypical British black comedy horror, it’s a must watch.
If you want to see the “Girly” trailer then just click on the video below:
Miscellaneous facts about the film:
Based on the play “Happy Family.” Director Freddie Francis specifically asked screenwriter Brian Comport to write a story built around Oakley Court, the house where the movie was filmed. Comport and Francis found “Happy Family” to be a good jumping-off point for the story, but neither one actually liked the play. The movie only retains the four principal characters’ names and the idea that they bring men home to participate in a role-playing game.
When The NFT in London had a season of Freddie Francis films, it could not find any prints at all.
The original poster art for the film was an eerie black and white family portrait of “The Family,” dressed in traditional English attire (six form uniforms for Girly and Sonny, a maid’s outfit for Nanny, and a World War II era dress for Mumsy). Though this iconography would have struck a chord with British viewers, it was deemed that US audiences wouldn’t understand the image. For the US release, the distributor commissioned a poster of an anonymous girl standing in for Vanessa Howard, wearing a cutoff skirt and clutching a doll in one hand and a bloody axe in the other.
Born out of cinematographer and latterly director Freddie Francis’ desire to make a film over which he had complete creative control as opposed to being a director for hire.
Freddie Francis had made several films at the striking location of Oakley Court outside of London but it had only been externally. He was keen to film inside the building for a change and saw this project as an opportunity to do that. He commissioned writer Brian Comport to write a screenplay on any subject whatsoever with the sole stipulation that it be based in that location.
Released at the same time as Goodbye Gemini (1970), another sexually provocative British film. At the time, there was a strong backlash against such films from the conservative press, meaning that some cinema chains refused to show the film. It was rebranded for US release and called simply “Girly” where it rather surprisingly found a small audience.
Freddie Francis’ favorite of all his films.
Salvation Films spent nearly four years trying to secure a DVD release for the film. In that time, Freddie Francis died. Vanessa Howard had agreed to record a commentary for the release but was very ill with a terminal pulmonary illness and also died before it could be released.
Maisie Mosco’s name is incorrectly spelt in the opening credits (“Masie Mosco”).