A wax museum owner uses his horror exhibits to unleash evil on the world.

You gotta love the 80’s, the amount of awesomeness that came out in such a short time was unreal.

For years I thought that ‘Hans’ was acted by the same guy who played ‘Hans’ in “Freaks” and it was supposed to be a sort of link, it turns out that it’s in-fact two different actors. It’s Mihaly ‘Michu’ Meszaros who’s in this film, Harry Earles was in “Freaks”.
You may also recognise the lead actor, Zach Galligan, he was ‘Billy Peltzer’ from the “Gremlins” series and puts in a great performance of a spoiled brat. 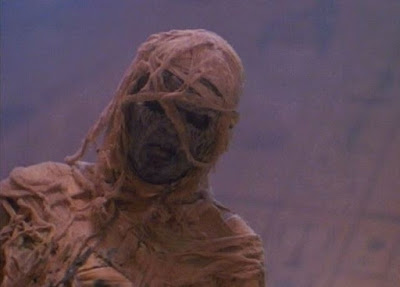 There were three characters that were supposed to be displays in the Waxwork, but were left out of the film for legal reasons: Jason Vorhees from “Friday the 13th”, five children from “Village of the Damned”, and the Thing. Oh if only……
Writer/director Anthony Hickox wrote the screenplay in only 3 days, just goes to show that you don’t have to spend months or even years to write an amazing script. He knew what he wanted to do and he did just that and look at how it turned out. 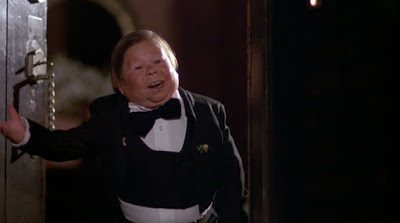 “Waxwork” is a perfect b-movie horror/comedy, it does exactly what it should and that’s entertain. If you’ve not seen it then you’re in for a treat!
If you want to see the “Waxwork” trailer then just click on the video below:
Miscellaneous facts about the film:
After the policeman visits the Waxwork with Mark, he realizes that many of the statues of the victims resemble missing people from posters he had seen. These posters are actually just copies of one of the posters from the opening credits of The Lost Boys (1987). All of the missing person posters have a single photo of a missing adult, but the posters all have the same information of two missing children on the poster: William G. Bailey 7-26-62 Sandy blond hair brown eyes Missing since August 6, 1979 (or 1973) Call the Santa Carla Police Department Susan Wilbur 5-30-69 Black Hair Blue Eyes Missing since February 6, 1983.
Effects artist Bob Keen spent 18 hours a day for 8 weeks working on the monsters in the film.
During the scene in the basement of the vampire’s mansion, crew on the sets said that it was “The bloodiest thing ever put to the screen”. Much of the gore in the scene was cut by the MPAA.
Christopher Bradley, who played Stephan, said in an interview that the bridge attached to hold the fake fangs in place to the roof of his mouth broke during production. Bradley had to stuff chewing gum inside of the hollow fangs in order to get them to stick to his teeth.
In the shooting script, there was supposed to be a scene where Mark and Sarah visit James and Gemma after they had decided not to attend the Waxwork tour. The couple are watching Dawn of the Dead (1978) together in James’s basement and Gemma unsuccessfully tries to get her boyfriend’s attention since it’s just the two of them. James isn’t in the mood, as he’s too caught up into the film, and Gemma sulks by getting a cigarette. Gemma hears a scraping noise on the window. and she switches the TV off to get James’s attention. James originally dismisses Gemma’s claim as nothing, until he hears the same noise, louder than before. James goes to the window and finds nothing, but is startled when Mark grabs his throat and leaps up screaming like a zombie. James falls to the floor, Mark and Sarah peer up from the window laughing, and James tells them to get lost. James leaves to go to bed, with Gemma shrugging and following after James. It remains unknown if the sequence was ever filmed or simply scripted.
In the shooting script, Johnathan is staring at an exhibit of Jason Vorhees from the Friday the 13th (1980) movies. When Johnathan tells Lincoln about it looked like the same Jason mask from the movies, Mr. Lincoln asks Johnathan: “They made a movie about the Jason killings?” In the film, there is no Jason Vorhees display and Johnathan instead stares at an exhibit of the Phantom of the Opera.
Kane Hodder, who did stunt work for the movie, also had an uncredited role in the film as Frankenstein’s monster.
Michael Gough. Christopher Lee, Peter Cushing and Donald Pleasence were all possibles for the cameo role of Sir Wilfrid.
18 wax horror exhibits are seen, including: – Count Dracula – the Phantom of the Opera – a witch – the Marquis De Sade – a werewolf – a mummy – a voodoo priest – a zombie – an urban legend killer (an axe murderer) – the Invisible Man – Frankenstein’s monster – an Invasion of the Body Snatchers (1956) pod – a demonic baby (from It’s Alive (1974)) – an alien creature – a “cobra-man” circus freak – Jack the Ripper – Mr. Hyde – and a golem.
In the original shooting script, the caged “cobra-man” circus freak was supposed to be a were-beast and the Man in the Iron Mask was supposed to be one of the exhibits.
Patrick Tantalo said that the Zombie sequence was filmed in one night in Griffith Park. Because they only had one night to film the sequence, the scene where a severed Zombie hand grabs Zach Galligan (Mark) on the wrist was filmed in reverse.
Karen Schaffer, who was the lady Zombie in the graveyard sequence, was actually the secretary of executive producer, and fellow Zombie, Dan Ireland.
Several names of the characters were changed from the initial shooting script for “Waxwork”. Tony was given a last name, Masters, which was left out of the film. Mr. Lincoln’s midget butler Junior was originally called “Hans”, and Lincoln’s tall servant Hans was called “Lurch” because he was described in the script as a Lurch-type character.
In the original shooting script, Sarah’s slashes she receives after being whipped by the Marquis de Sade remain on her back when she returns to the Waxwork with her friend Mark. After Mark and Sarah return to the Waxwork, the script describes the scene as “Sarah is back in her normal clothes but we can tell by the rest of her that she has really been through the experience that we saw.” However, in the film, the slashes Sarah receives from her whipping disappear when she returns to the Waxwork with Mark.