Two teenage boys unwittingly summon an ancient evil entity known as The Blind One by delving into black magic while trying to escape their mundane lives.

New Zealand has been giving us some great films recently and this film here continues that run.

I didn’t know what to think when I first saw the trailer for this film, I mean let’s be honest here, heavy metal Horror films have always ended up being a mixed bag.
Luckily all these doubts are pushed aside very swiftly, you are quickly thrown into the insane world that this film creates and you better be ready for it. 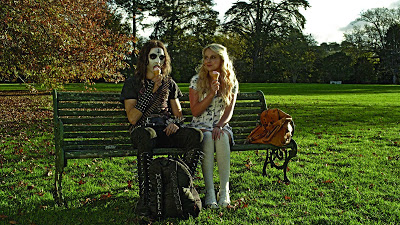 I don’t want to give too much away and ruin this film for you but what I can tell you that this film is a splatter-fest that will please old and new fans alike.
The best comparison I can give is a modern version of films like “Brain Dead” and “Evil Dead 2” and it has a very twisted sense of humour to boot.

“Deathgasm” is a fantastic comedy Horror for the 21st century, a very fun and bloody film.
If you want to see the “Deathgasm” trailer then just click on the video below: