An aging, reclusive Southern belle, plagued by a horrifying family secret, descends into madness after the arrival of a lost relative.

This was one of those films I’d had on my ‘To Watch’ list for years and I finally got round to watching it recently.

I’ve recently been having a bit of a classic Horror run lately, these old films grab me in a way modern Horror rarely does, the storytelling always keeps me engaged and holds my attention throughout the feature, it’s something that I hope filmmakers will pay more attention to.
This film was actually intended to be a follow up to one of my all time favourites “Whatever Happened To Baby Jane?” reuniting bitter enemies Bette Davis and Joan Crawford on screen but Crawford dropped out, shame really as their feud created great on screen tension. 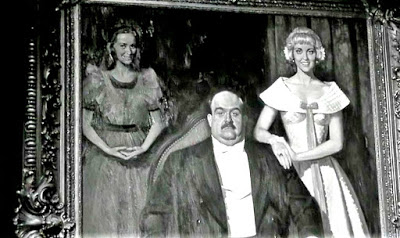 Director Robert Aldrich had a great visual style and alongside his longtime cinematographer Joseph Biroc they created some stunning shots that is on show for all to see here, add the amazing  score from Frank De Vol into the mix and it makes for great viewing.
Lead star Bette Davis puts in the incredible performance she’s known for, a true icon in her own right. Her co-stars are also great, especially Olivia de Havilland who replaced Joan Crawford, she had big shoes to fill and managed to do so with ease and grace.

“Hush…Hush, Sweet Charlotte” is a film that deserves more recognition, a true classic that has been overlooked.
If you want to see the “Hush…Hush, Sweet Charlotte” trailer then just click on the video below:
Miscellaneous facts about the film:
Final released film of Mary Astor. (“Youngblood Hawke” was actually the last film Miss Astor worked on, but it was released before “Hush, Hush Sweet Charlotte.”)
When Joan Crawford was in Baton Rouge and came to film Miriam’s arrival, there was no dialogue involved. Joan was to arrive at the mansion in a cab, exit, carrying a small case, pay the driver, and lowering her sunglasses, look up at the balcony of the house where Bette, in pigtails and a nightgown, was standing in the shadows, holding a shot gun. The scene was designed to be photographed in a wide continuous shot, and, thanks to Crawford’s proficient technical skill, it was completed in one take. Later that evening, when publicist Harry Mines called on Bette in her motel bungalow, he found her standing in the middle of the room practicing Joan’s scene. “My God!” said Bette. “I’ve been here all evening long with a pair of dark glasses and some luggage and I’m imagining getting out of a cab and trying to do that whole business in one gesture. How did she do it?”
The painting of young Charlotte is of Bette Davis in her role as Julie in Jezebel (1938).
On Wednesday, July 29, 1964, Joan Crawford worked until 1:30 p.m. Crawford then informed Robert Aldrich that she had overtaxed herself the previous day and would have to return to a less strenuous shooting schedule. Aldrich informed her that he wanted her examined by the company’s insurance doctor. Resenting his suspicions and harassment, Joan returned to her dressing room and made it clear she would no longer talk directly to the director. “The only way they communicated was through me,” said Crawford’s makeup man, Monty Westmore. “Joan would tell me something, then I’d go and tell Aldrich. He would give me a reply to take back to Joan. It was an unpleasant, awkward position for me to be in.”
When Olivia de Havilland agreed to make the film, Robert Aldrich called Bette Davis to give her the good news. He also requested she keep the news a secret until he returned in two days, when he would legally inform Joan Crawford and her lawyer by letter. However, Bette didn’t listen, she called her press agent, Rupert Allan, who immediately leaked the story to the press.

Joan Crawford had it in her contract that her trailer be placed so many yards from Bette Davis. The trailer was set up at the back of the house, with her own golf cart to take her back and forth when filming.