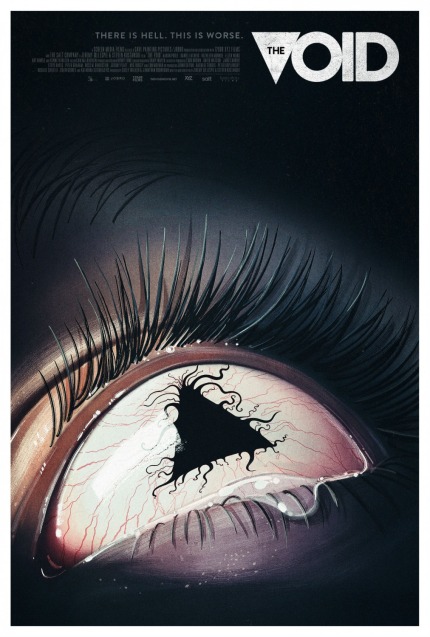 Shortly after delivering a patient to an understaffed hospital, a police officer experiences strange and violent occurrences seemingly linked to a group of mysterious hooded figures.

There are some films you watch and wonder “What the hell?!”, this film left my brain feeling like sludge.

I’ll be honest with you here, I really didn’t want to review this film as I feel the less you know about it the better but at the same time I feel like I need to share my thoughts on it and maybe let people know about it who don’t already. I promise I will try not to give too much away.
The film is actually a crowdfunded success story, it’s good to see that an original idea can get a big backing behind it and the fans can help finance the project and make someone’s dream come true and even launch their careers, it’s great to have the fans involved in the process.

The film wears its influences on its sleeves and it does so with honour, the obvious inspirations coming from H.P. Lovecraft and John Carpenter. The film plays like a homage to both men and is like a fan’s love letter to our beloved genre, it adds a sense of charm to it.

The film does have one downside and that’s that the dialogue can be a little shoddy at times but that’s it, but with the amazing practical effects on show it delivers an impact and atmosphere that you rarely see these days and it was great to see.

“The Void” is admittedly not for everyone, it’s weird and will mess with your head but I think true fans will get a big kick out of this film.
If you want to see “The Void” trailer then just click on the video below:

Miscellaneous facts about the film:
The Void was a crowdfunded project.

The movie’s tag line “There is a Hell. This is worse.” Comes from director Steven Kostanski’s 2007 short Insanophenia.

At 00:07, while Nursing resident, Kim (Ellen Wong) is in a patient’s room, opening scenes from Night of the Living Dead (1968) can been seen on the room’s television.

Kenneth Walsh and Kathleen Munroe had previously starred together, playing father and daughter, in George A. Romero’s “Survival of the Dead”.