The Horror genre recently lost another one of its icons.
So let me set the scene for you, It’s the year 2000 and Autumn is just around the corner. I’m sat watching some television like any normal teenager when I see an advert on Channel 4 that would ultimately change my life forever, there was no going back.
You see that advert was for a certain film called “The Texas Chainsaw Massacre”, now that may not seem like too much of a big deal now but that advert caused shockwaves throughout the UK and had Horror fans chomping at the bit, it’s so strange to think of now.

When “The Texas Chainsaw Massacre” was released in 1974 it wasn’t too long before it caused uproar and was ultimately banned by the BBFC, believe it or not the ban even included that the word ‘chainsaw’ itself be barred from movie titles, crazy right.
For 24 years that ban stayed in place, then in 1998 the film was finally granted a licence and finally the BBFC lifted it’s ban and the film was finally released on DVD, all this was kept quiet though and not many people seemed to know about the ban being lifted.

As you can imagine after all the commotion the film caused and the subsequent events that followed, the film had already made a name for itself, for instance the name of the film itself was enough to strike fear into people, it had a certain reputation amongst people.

By the time it was finally released for viewing I had already heard all the stories from people who were there when it was originally released and there memories of watching a grainy version of the film and how they couldn’t sleep for weeks afterwards.

So as you can imagine I was severely anxious  about watching the film, it was to be shown on Halloween night and I knew that I was going to be home alone that night so that made it somewhat more unnerving as it sounded like a Horror film in itself.
As the night got closer and the advert was run more and more I could feel myself getting seriously worked up about watching the film, so much so infact that I was starting to question whether I was actually going to be watching it or not, no matter how much I wanted to.

Then the day arrived, Halloween was here and on my favourite holiday I was so nervous and could feel myself getting more and more anxious as the hours rolled by, once I was alone it was full blown panic mode, this films reputation had well and truly got me frightened.
Don’t ask me why but I switched on the TV, turned off all the lights and tried my best to settle in to watch the film. I just couldn’t sit still though, as that clock ticked nearer I got more anxious and then TV announcer said “Up next, The Texas Chainsaw Massacre”.

For the next hour and a half I was so tense, so much so that I cramped up and, embarrassingly, I watched most of it through my fingers only hearing certain parts of the film and then it ended, it was over, the credits were rolling and I stayed on the settee for the next hour.

I didn’t even flinch, I just sat there and stared at the TV and once I’d built up the courage I finally made my way to bed and, well I didn’t sleep one wink. The scenes I’d seen, I could’v sworn I saw the hook go through her back and the noises, the screaming, all going through my head.

The following Monday at school people were all talking about it “Did you watch it?”, “Oh did you see that scene where…?”. Of course I said Id watched it all and yeah I enjoyed it but it wasn’t scary, they didn’t need to know that I’d watched most of it through my fingers.

Cut to about a month later, I’m at a friends house with some friends and what do you know, they taped the film and think it would be a great idea for us all to watch it, this time there was no escaping, no hiding behind my hands, this time I had no choice but to watch.

This time I was a bit more prepared as I already knew what was coming but still it was a rollercoaster of emotions but this time it was more of an excitement, being in a room with friends who were screaming and jumping and not being on my own made it, well fun.
After this the film became a firm favourite of mine and I sought out other works by Tobe Hooper, what I didn’t know was that one of his films was already one of my favourites at the time, “Poltergeist”. I miss those early days of discovering new directors and their back catalogue. 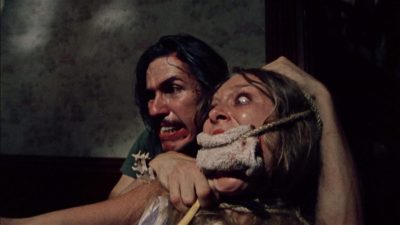 Ever since those days I’ve followed Hooper’s work closely, I discovered gems such as “The Funhouse” which I absolutely love, “Lifeforce” and one of my rare favourite remakes “Invaders From Mars” which I still watch from time to time and never bore of it.
Also let’s not forget the amazing “The Texas Chainsaw Massacre” sequel, it may have taken twelve years but he didn’t miss a step and that shows when you watch them side by side. It was still so much fun and I’m glad he made it, plus it gave us the great Bill Moseley.

Hooper most certainly had a huge influence on many filmmakers over the decades, even Wes Craven cited him as a major influence on his work plus many more like Hideo Nakata and Rob Zombie. He certainly left a legacy most Directors can dream of.
I always felt he had at least one more great film in him to show us all but unfortunately that never happened but atleast we still have his other films to enjoy, Also don’t forget he gave us the great ‘Freddy Kreuger’ prequel for “Freddy’s Nightmares”.