“Don’t sit so close to the TV, you’ll get square eyes!”

Anybody else get told this over and over again? I’m sure it wasn’t just me. I’m also sure that I’m not the only one ignored this statement either. 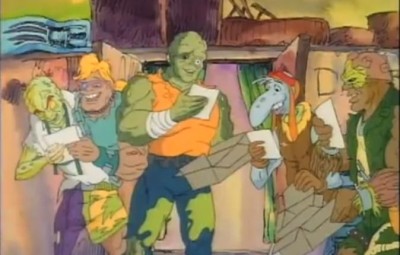 I can just vision it in my head right now, I’m sat right in front of the TV, a bowl of cereal in hand piled way too high and overflowing with milk (I’ve always said that cereal is a meal you can have anytime of the day and I still stand by that) as I stared at the bright colours and monstrous characters on the screen.

Now these were the days before names such as Freddy Kreuger, Michael Myers, Jason Voorhees and other such character meant anything to me. Sure I knew the likes of Dracula and Frankenstein and other characters such as werewolves, zombies and Egyptian mummies, who else do you think I dressed up as for Halloween?!

When I look back and think about it I always had an affinity for the ‘Horror’ side as a child, I loved monsters and ghouls and even the toys and books I had where mostly to do with monsters, mutants (but that’s for another post). The same thing applied when it came to my viewing habits, if it had a monster or something alike in the show then I watched it.

Yes I was a TV kid, I loved television, especially cartoons. I could sit there for hours on end and watch show after show. I was hypnotized by the screen, I think it’s the reason I can sit and watch film after film after film these days. Basically I was in training, so to all those that said watching all that TV would get me nowhere, screw you.

I know now that I had somewhat of an unhealthy obsession when it came to the TV, I would get upset about going on family holidays because I knew I would miss episodes and when I got back the storylines may not make sense. This was the days before catch up TV and YouTube so there was no way to catch up on what I’d missed, except hope for a repeat.

Damn, my parents must’ve hated me, but what can I say? I really enjoyed my TV shows. It was because of this obsession that I knew about “Beetlejuice” before I even knew of the Tim Burton film, I actually thought the film was a live action version of the cartoon at first until I was told otherwise, well I was a child.

It was actually the same with “The Addams Family”, I thought the films were based on the cartoon show that I loved watching, once again I was put right and then years later I found out about the original black and white show and even the old comic strips that originated from. The ignorant bliss of childhood.

When I think back I have to say that I was extremely lucky, I grew up during a time when there was an abundance of cartoon shows that had Horror elements to them, the seemed to be everywhere and I’m certain that this is the reason why I’ve grown up still loving anything Horror, the influence was right there.

There was one cartoon I was truly obsessed with, I’m talking a real infatuation and that show was “Aaahh!!! Real Monsters”. Whenever that was on it took precedence over everything, I wouldn’t move or talk whilst watching it. The only noise you’d hear was laughter as I stared wide eyed at the screen.

I can tell you now I got into big trouble quite a few times whilst watching my beloved characters of ‘Ickis’, ‘Oblina’ and ‘Krumm’ get up to mischief, it was well worth it though as it was a show that didn’t have a time slot so when it was on I took the chance and then took the punishment. Again, my parents must’ve hated me. 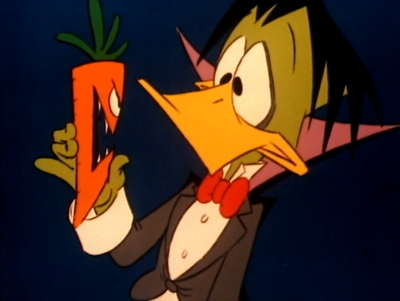 As I said earlier I like to credit growing up on a diet of Horror cartoons as to why I’m so passionate about the Horror genre today, sure it’s easy to look back on the past with rose tinted glasses but I truly loved sitting in my favourite seat and devouring all these entertaining cartoons that gave us so many great characters.

I know now that I truly was lucky to grow up in such an era, a last of it’s kind really before the likes of CGI became big and took over and then kids Horror seemed to just fade away, such a shame really, I don’t see anything like what there was when I was a child. Yet those of us who grew up in that era look back on it so fondly.

Now I know you hear a lot of people say things like that when they talk about their childhoods and I know it may sound stupid but I’m being serious when I say that I truly enjoyed watching these cartoons, I’m glad I did as I wouldn’t be who I am now and they bring back great memories and remind me of much simpler times.

I’m not ashamed to admit that I still watch some of the cartoons from time to time (thank you YouTube!), I even own some of them on DVD, though I would like to own more over time, especially the full collection of “Aaahh!!! Real Monsters” but sadly there’s no full UK box set release, hopefully one day. 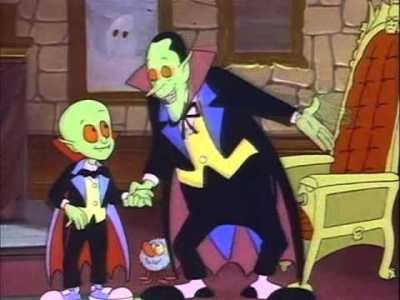 I know all this may sound like the rubbish ramblings of someone who sounds like he’s getting older and is having something of a crisis, and you maybe right, but tell me you didn’t look at the photos ere and feel a heartwarming tinge of nostalgia or have that amazing moment of remembrance about a certain show.

I can’t be the only one who grew up on Horror cartoons, or that still in fact watches them, I’d love to hear what your favourites are. If this post is boring then I do apologise but I got lost in the reminiscence of it all and I had some playing whilst writing it so I may have been a bit distracted at times hahaha.