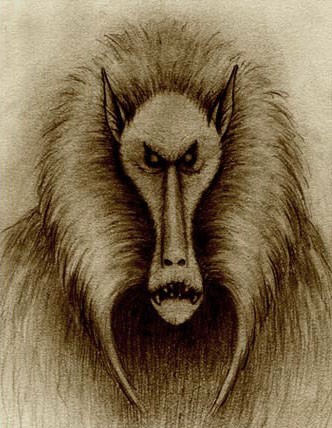 The Devil Monkey is a primate cryptid in America, described as being about the size of a large adult Saint Bernard and covered with a think coat of dark wooly hair. It’s most notable attributes are its decidedly simian features, extended feet, and small, presumably pointed ears.

Described as resembling a baboon with powerful, almost kangaroo like legs, the Devil Monkey have been sighted through out the American Mid West and as far north as Alaska, one documented sighting even took place in down town Chicago. The creature is often reported to have brown hair and a white patch on its underbelly. The Devil Monkey is known to be extremely aggressive. Other distinguishing traits that Devil Monkeys are said to bear include 3-toed, razor-clawed feet, tiny pointed ears and a long, often bushy, tail

The first reported encounter with this swift, dangerous predator occurred in 1934, in South Pittsburgh, Tennessee. According to the reports – which were allegedly published in national newspapers – eyewitnesses described a mysterious beast that could “leap across fields” with “lightening speed.”

There is more than one report of them attacking people, in the early 1960’s a pair of nurses where driving home from work in the Saltville region of Virginia when an unknown creature, resembling a baboon, attacked them. The animal attacked with such power that it ripped the convertible top off the car before the two could escape. In 1969, esteemed mystery ape researchers Rene Dahniden and John Green looked into accounts of a long-tailed “monkey” beast that eyewtinesses claimed was lurking near Mamquam, British Columbia. This creature was said to have left a series of distinctive, three toed tracks – much like those attributed to Devil Monkeys as well as the legendary Kalnoro – in its wake.
In 1973, famed cryptozoologist and author Loren Coleman investigated reports of three, black bushy-tailed “giant monkeys” that were said to have slaughtered livestock in Albany, Kentucky. Coleman mentioned the event in an interview with Animal Planet:
“I investigated that case in depth. I interviewed the people, who were very sincere. In the whole context of devil monkey reports, it seemed extremely sincere. You have these reports of hairy, monkey-like creatures with tails, very different from Bigfoot.” 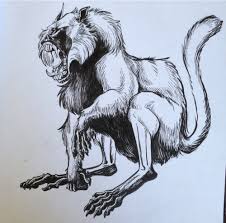 In 1979, there was a spate of reported encounters with a bipedal, monkey-like critter known as the Belt Road Booger, which hailed from the rural depths of Georgia. One female eyewitness described it as: “The ugliest looking thing I’ve ever seen… (it had a tail) like a beaver’s, but it’s bushy.” She also claimed in bore “a face like a dog.” These traits are all known to be Devil Monkey characteristics.
In 1996, a woman named Barbara Mullins was driving down a stretch of road in Louisiana known as Highway 12 when she noticed something odd on the side of the road. At first Mullins thought the carcass she had found was that of a dog, that was until she saw it’s baboon like features. Mullins snapped several pictures of the carcass with her camera; the resulting images have been the topic of much debate in the cryptozoology world.

It’s worth mentioning that in 1996, Louisiana was also the site for another strange eyewitness report that seems very much like a Devil Monkey. The report was posted online by an biologist – who works as a consultant for a biotechnology firm and, understandably, withheld his name – in July of 2009. From his own account:
“As I sat there alone, gazing out at the rain, I noticed some movement to my left in a large field next to the property. This field is separated from the property by an old fence with scattered pine trees next to it… I turned to look and saw something, I honestly don’t know what, running extremely fast on all fours from the field towards our property. At first I guess I kinda thought it may be a dog, but as it got closer I realized I was wrong. The thing, whatever it was, ran on all fours to a spot in the fence were the trees were about thirty feet apart, and lept over the five-foot fence in one hop. Once on my side of the fence, this thing stood up on two legs! It was only thirty feet from me at that point, and I got a really good look at it. It was about four feet tall, maybe a little bigger. It had really big, yellowish eyes, large pointed ears, and a sparse coat of shaggy fur. It stood on its tiptoes, and had a long, somewhat bushy tail, kinda like a squirrel, but not nearly as thickly furred.The snout was very cat-like… I was close enough to make out thick hairs on the face. I’m inclined to believe that these may have been whiskers. Once it stood, it kept its arms to its sides, much like a human, but slightly bent at the elbows. Its hands had identifiable fingers with noticeable claws. I know I saw something that day that I could not explain, and I am hard pressed to ask others to blindly accept what I say at face value. I am not trying to convince anyone, but rather find answers for myself… in any case, after considering the evidence, I firmly believe that what I saw was indeed a so-called devil monkey.”

In 1997 a simian creature around 5 feet tall, with pointy ears, a short tail, disproportionately long arms, and a face like a baboon was seen in Dunkinsville, Ohio. Yet another incident happened as recently as 2001, in Danville, New Hampshire, where residents were alarmed by unearthly howls and shrieks in the middle of the night unlike those of any known animal in the area. People who actually claimed to have seen the creature responsible for the eerie sounds reported that it was a large primate of some sort with a dog-like muzzle, prominent claws, sharp teeth, and a dark reddish brown coat of shaggy hair. Danville’s own fire chief even apparently saw the beast, and the creature was purportedly seen at least 9 times over a 2-week period, to the point that it caused a minor mass hysteria. Then the reports just stopped.
Even the bustling city of Chicago, Illinois has had its own sighting in January of 2006. On January 12, 2006, one unnamed witness claimed that he had come home to find a “devil-like creature” attacking his family pet, a Labrador dog. It was described as “an unusual combination of a monkey, wolf, and devil with long fangs, a monkey-like tail and extremely bright glowing eyes,” and he even claimed to have photographed the incident. Indeed, it was apparently the light of the camera flash that scared the thing off, although the results have left much to be desired, and have proven to be controversial to say the least, with many crying hoax.

Who doesn’t love a good primate legend? I always say that you shouldn’t dismiss stories like these as you nevr know what’s out there, they’re discovering new species all the time.