For this ‘Ten Years On’ post we take a look back at “Drag Me To Hell”.
I cannot begin to tell you how excited I was for this release, the trailer had me hooked and I counted down the release date.

Why was I so excited? because Sam Raimi was making a return to the Horror genre, not just by producing a film but this was one he’d wrote with his brother, Ivan Raimi, and would also be directing it as well. He was to be full hands on with this project, so what wasn’t there to be excited about?

You have to remember as well that this was hot on the heels of the hugely popular “Spider-Man” trilogy that Raimi had just done and his name was now more popular than it ever had been. Raimi wasn’t just a Horror star now, he was a household name, due to this the film was hugely marketed.

Sounds like a sure thing huh, well unfortunately it wasn’t. I was left severely disappointed, so disappointed in fact it would be years before I gave it another go and that didn’t make any difference. If anything it enforced my opinion of the film, which is sad really as the film did have some serious potential.
I will admit that the film has some cool moments but not enough to carry the film and don’t get me started on that awful ending. The film does have its fans but for me it was just a huge let down, the Raimi magic just wasn’t there and it was a sad moment when I noticed what was missing and it was a big part. 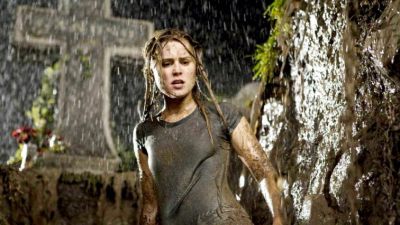 “Drag Me To Hell” has not aged well either, I recently watched some clips and they look even more terrible now than I remember them being. As I said it had potential but it sadly just didn’t live up to it.