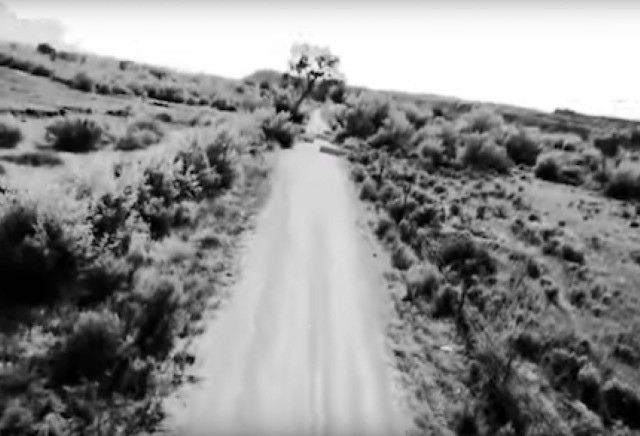 Skinwalker Ranch, also known as Sherman Ranch, is a property located on approximately 512 acres southeast of Ballard, Utah that is reputed to be the site of paranormal and UFO-related activities.
Skinwalker Ranch takes its name is taken from the skin-walker of Navajo legend concerning malevolent witches.

Claims about the ranch first appeared in 1996 in the Salt Lake City, Utah Deseret News, and later in the alternative weekly Las Vegas Mercury as a series of articles by investigative journalist George Knapp. These early stories detailed the claims of a family that allegedly experienced inexplicable and frightening events after they purchased and occupied the property.
The ranch, located in west Uintah County bordering the Ute Indian Reservation, was popularly dubbed the UFO ranch due to its ostensible 50-year history of odd events said to have taken place there. Knapp and Kelleher cite the 1974 book “The Utah UFO Display: A Scientist’s Report” by Frank Salisbury and Joseph ‘Junior’ Hicks, which details an earlier investigation into alleged UFO sightings in the Uintah County region, as partial confirmation of their account. 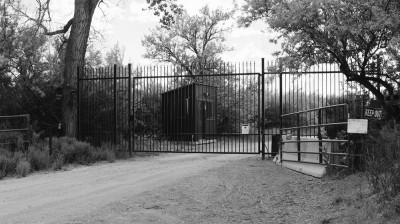 According to Kelleher and Knapp, they saw or investigated evidence of close to 100 incidents that include vanishing and mutilated cattle, sightings of unidentified flying objects or orbs, large animals with piercing red eyes that they say were unscathed when struck by bullets, and invisible objects emitting destructive magnetic fields.
Among those involved were retired US Army Colonel John B. Alexander who characterized the NIDSci effort as an attempt to get hard data using a “standard scientific approach”. However, the investigators admitted to “difficulty obtaining evidence consistent with scientific publication.”

The Sherman family claims that a number of their cows were mutilated. One such cow had no signs of harm, not even bleeding, other than a hole bored through its eye. Others cows were found sliced up, with organs or other body parts carefully removed. In each case, the Shermans found no blood. A number of other cows, as well as six cats, vanished without a trace. Ranch dogs, meanwhile, were fearful of an unknown presence.
In another instance, the Shermans returned home to find four bulls packed into a trailer. When discovered, the bulls snapped out of a trance and became upset. No one could figure out how four bulls ended up in the trailer, which was locked and small enough that getting just one in proved difficult for the ranchers, let alone four. 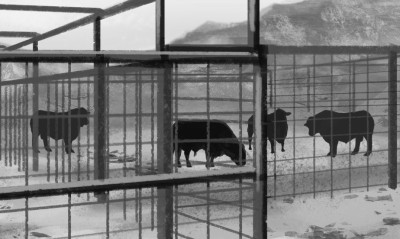 Just after the Sherman family moved to the ranch, they were approached by a huge, friendly wolf. Not long thereafter, the wolf thrashed a calf, prompting the rancher to hit it with a stick, to no avail. He shot the wolf with a .357 Magnum, which produced no results. The wolf was struck two more times, then several times with a hunting rifle, with no result. Eventually, the wolf left of its own accord. The rancher followed its tracks, which simply came to an end, as though the wolf ceased to exist as it walked. Throughout their time there, members of the family claimed to see other large wolves and canine beasts.
Poltergeist activity was reported by the Sherman family shortly after their run-in with the bulletproof werewolf. According to a segment on Coast to Coast AM, a paranormal radio news program, the matriarch of the Sherman clan stated she often came home with groceries, unpacked them, and later discovered all the food repacked in shopping bags. The family also reported missing or moved objects, such as a hairbrush found in the freezer when it had last been seen on the bathroom counter. The Shermans heard voices in a language they could not understand, and they also spotted shadows in the house.

The family reported seeing a number of bizarre animals, including a beast that looked similar to a hyena on steroids. According to journalist George Knapp, they saw the creature accosting one of their horses before it disappeared, leaving behind only claw marks on the horse’s legs. This same animal may have been seen by others. The wife of a local cop noticed a similar creature at Skinwalker, and a visitor to the ranch spotted a brutish animal that ran 100 yards in a matter of seconds and roared loudly.
UFO sightings are the most commonly reported extraordinary phenomenon at Skinwalker. The Shermans stated they saw several unexplained aircraft, as well as blinking lights, and heard strange voices speaking an otherworldly language. Numerous cattle were also mutilated during their ownership of the ranch, which many attribute to aliens interference. According to the Daily Beast, Joshua Hicks, a teacher who claimed to have seen a UFO, believes about half the local population had spotted a UFO at some point.

The Sherman family often found crop circles laid out in triangular patterns. They also reported finding neat, perfectly proportioned spherical holes in the earth. They never figured out what or who caused these markings, but noted that it would be unlikely for them to miss a human visitor sneaking up the solitary road leading to the property.
The Sherman family spotted blue orbs on the property and In May 1996 one event with the orbs was the final straw. Terry Sherman set three dogs on the orb, which ducked away from them each time they approached, leading the animals further and further away from the ranch. Once out of sight of the ranch, the rancher heard the dogs yelp, but he did not pursue them out of fear. In the morning, the rancher went to investigate and found three circles of burned grass with goo in the middle, supposedly all that remained of the dogs.

In 1998, the Sherman family began to speak about the events going on at Skinwalker Ranch. Journalist George Knapp published a series of articles in the Deseret News in Salt Lake City as well as the Las Vegas Mercury. George Knapp went on to co-author a book detailing the mutilated and vanished cattle, alleged UFO sightings, crop circles, poltergeist activity, Bigfoot-like creature sightings, and large animals with red eyes. The Sherman family didn’t originally plan to sell Skinwalker Ranch. However, a millionaire business tycoon named Robert Bigelow offered to purchase the property. Mr. Bigelow is a firm believer in UFO-logy and the founding member of the National Institute for Discovery Science.
He purchased Skinwalker Ranch for $200,000 and had the Sherman family sign a non-disclosure agreement saying they would cease talking about their experiences. He established a high-tech compound with PhD-level field investigators, cutting-edge equipment, a security detail, and scientists. The Ranch was under guard 24 hours a day. The underlying purpose of this research was to get a more in-depth study of paranormal topics like cattle mutilation and UFOs as well as various fringe sciences. However, the National Institute of Discovery Science had very little success, and it was officially disbanded in early 2004.

The Bigelow Aerospace Advanced Space Studies quickly replaced the disbanded foundation. This organization was apparently working toward a government sponsorship, and it was much more secretive. The Advanced Aviation Threat Identification Program was a secret investigation effort funded in 2007 to study UFOs by the United States Department of Defense. It focused the majority of its efforts on Skinwalker Ranch.
For the next few years, the United States Department of Defense spent $22 million on this program. Luis Elizondo was the military intelligence official from the Pentagon who was tasked with running this operation. This shadowy and secret program locked in funding largely due to Robert Bigalow’s friend, Nevada Democrat Harry Reid. 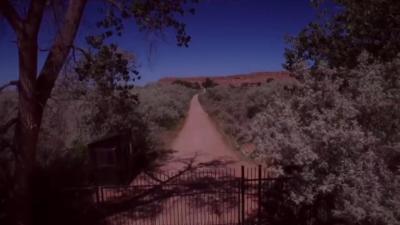 This information was secret until 2017 when the New York Times released it. When they broke the story of this program, the Department of Defense confirmed the program’s existence, and Harry Reid admitted to being an accomplice to it. However, even though the Department of Defense confirmed the program’s existence, it never officially acknowledged it. It did admit that the program shut down in 2012.
In that same year, the Bigelow Aerospace Advanced Space Studies lost the Department of Defense’s funding because the Advanced Aviation Threat Identification Program’s contract wasn’t renewed after it expired. Skinwalker Ranch sold for an estimated $4.5 million to Adamantium Holdings in 2016. After this purchase, all roads leading to the ranch have been blocked, the perimeter secured and guarded by cameras and barbed wire, and surrounded by signs that aim to prevent people from approaching the ranch. 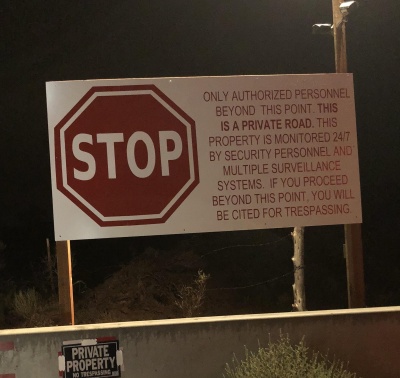 At this time, Bigalow’s company pulled their security teams, but the new owners quickly replaced them. This was also the year that a Uintah County public road, the Kicken Ranch Road was illegally gated. This road bisects Skinwalker Ranch.

Interestingly enough, Adamantium Real Estate sent a representative to approach Uintah County to request a road vacation. They claimed that the owners wanted to make the road private due to rampant trespassing. The county granted the request, and gates block the entrance to Skinwalker Ranch today. In 2017, the name “Skinwalker Ranch” was filed for trademark through Justia Trademarks. The trademark was issued in 2018.

I’ve always really enjoyed the stories of Skinwalker Ranch and there’s no denying there’s something mysterious about it all, whether you believe anything about it is another matter.