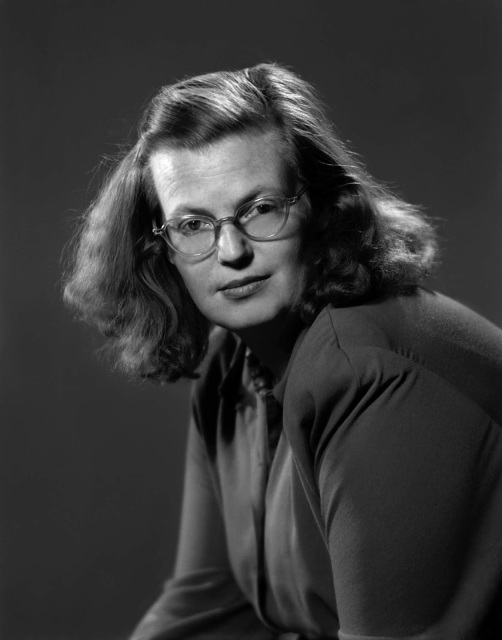 That’s right, this month the amazing Shirley Jackson, is my icon of the month.

Jackson was born December 14, 1916, in San Francisco, California, to Leslie Jackson and his wife Geraldine nee Bugby. She was of English ancestry, and her mother Geraldine traced her family heritage to the Revolutionary War hero General Nathanael Greene. Jackson’s maternal grandfather, John Stephenson, had been a prominent lawyer in San Francisco — later a Superior Court Judge in Alaska — while her great-great grandfather was Samuel Charles Bugbee, an architect , whose works included the homes of Leland Stanford and Charles Crocker and the Mendocino Presbyterian Church.

Jackson was raised in Burlingame, California, an affluent suburb of San Francisco, where her family resided in a two-story brick home located at 1609 Forest View Road. Her relationship with her mother was strained, as her parents had married young and Geraldine had been disappointed when she immediately became pregnant with Shirley, as she had been looking forward to “spending time with her dashing husband“. Jackson was often unable to fit in with other children and spent much of her time writing, much to her mother’s distress. When she was a teenager, her weight fluctuated, resulting in a lack of confidence that she would struggle with throughout her life.

She attended Burlingame High School, where she played violin in the school orchestra and also began writing poetry and short stories. During her senior year of high school, the Jackson family relocated to Rochester, New York, after which she attended Brighton High School, receiving her diploma in 1934. She then attended the nearby University of Rochester, where her parents felt they could maintain supervision over her studies. Jackson was unhappy in her classes there, and took a year-long hiatus from her studies and spent a year at home practicing writing, producing a minimum of a thousand words a day, before transferring to Syracuse University, where she flourished both creatively and socially.

Here she . While a student at Syracuse, Jackson became involved with the campus literary magazine where she became fiction editor, through which she met her future husband, Stanley Edgar Hyman, who later became a noted literary critic, together they founded a literary magazine, Spectre. While attending Syracuse, the university’s literary magazine published Jackson’s first story, “Janice”, about a teenager’s suicide attempt. Both graduated in 1940 with Shirley receiving her bachelor’s degree in journalism and moved to New York’s Greenwich Village, where Shirley wrote without fail every day while they both worked odd jobs.

In 1940 after graduating, Jackson and Hyman married and had brief sojourns in New York City and Westport, Connecticut, then n 1945, Stanley Hyman was offered a teaching position at Bennington College, and they moved into an old house in North Bennington, Vermont, where Shirley continued her daily writing while raising children and running a household. In 1949, the Hyman family moved to Westport, Connecticut, so Hyman could commute to his new job on The New Yorker staff. In 1951 the Hymans moved back to North Bennington, where they would remain for the rest of their lives.

Jackson and Hyman were known for being colourful, generous hosts, who surrounded themselves with visiting poets, artists, composers and literary talents, including Ralph Ellison who spent months in residence with the Hymans while completing “Invisible Man”. They were both enthusiastic readers whose personal library was estimated at over 100,000 books. They had four children, Laurence (Laurie), Joanne (Jannie), Sarah (Sally), and Barry, who later achieved their own brand of literary fame as fictionalized versions of themselves in their mother’s short stories.

In 1948 The New Yorker published Jackson’s iconic story, “The Lottery,” which generated the largest volume of mail ever received by the magazine – before or since – almost all of it hateful, many readers expressed confusion about underlying meanings and anger over its disturbing ending. “The Lottery” has since been published in dozens of languages, and is still required reading in U.S. high schools It is possibly the most well-known short story of the 20th Century. In 1951 Jackson’s succession of Gothic novels began with the publication of “Hangsaman”, and her “The Summer People” was chosen for Best American Short Stories.

According to Jackson’s biographers, her marriage was plagued by Hyman’s infidelities, notably with his students, and she reluctantly agreed to his proposition of maintaining an open relationship. Hyman also controlled their finances (meting out portions of her earnings to her as he saw fit), despite the fact that after the success of “The Lottery” and later work she earned far more than he did.

In 1956 “Witchcraft of Salem Village”, a non-fiction juvenile volume was released. “One Ordinary Day With Peanuts” was chosen in 1956 for Best American Short Stories, and also that year, the film version of “The Bird’s Nest”, “Lizzie,” was released. During the late fifties Jackson published “Raising Demons”, the second family chronicle, The Sundial was published which concerned a family of wealthy eccentrics who believe they have been chosen to survive the end of the world and the one-act play “The Bad Children”.

Jackson’s fifth novel, “The Haunting of Hill House” (1959), follows a group of individuals participating in a paranormal study at a reportedly haunted mansion. The novel, which interpolated supernatural phenomena with psychology, went on to become a critically esteemed example of the haunted house story, and was described by Stephen King as one of the most important horror novels of the twentieth century. Also in 1959, Jackson published the one-act children’s musical “The Bad Children”, based on “Hansel and Gretel”. In 1961 Jackson received the Edgar Allan Poe Award for “Louisa, Please,” one of the few such awards she ever received during her lifetime.

By the time “The Haunting of Hill House” had been published, Jackson suffered numerous health problems. She was overweight, as well as a heavy smoker, which resulted in chronic asthma, joint pain, exhaustion, and dizziness leading to fainting spells, which were attributed to a heart problem. Near the end of her life, Jackson also saw a psychiatrist for severe anxiety, which had kept her housebound for extended periods of time. To ease her anxiety and agoraphobia, the doctor prescribed barbiturates, which at that time were considered a safe, harmless drug.

For many years, she also had periodic prescriptions for amphetamines for weight loss, which may have inadvertently aggravated her anxiety, leading to a cycle of prescription drug abuse using the two medications to counteract each other’s effects. Any of these factors, or a combination of all of them, may have contributed to her declining health. Jackson confided to friends that she felt patronized in her role as a “faculty wife”, and ostracized by the townspeople of North Bennington. Her dislike of this situation led to her increasing abuse of alcohol in addition to tranquilizers and amphetamines.

In 1963, director Robert Wise released “The Haunting,” the first film adaptation of Jackson’s novel, to superb reviews. Jackson was invited to join the teaching staff at the famed Breadloaf Writers’ Conference, and she continued to review children’s books for the New York Herald Tribune. In 1965 Jackson was awarded the Arents Pioneer Medal for Outstanding Achievement from Syracuse University, but illness prevented her from attending.

Despite her ailing health, Jackson continued to write and publish several works in the 1960s, including her final novel, “We Have Always Lived in the Castle” (1962), a Gothic mystery novel. The novel was named by Time magazine as one of the ‘Ten Best Novels’ of 1962. The following year, she published “Nine Magic Wishes”, an illustrated children’s novel about a child who encounters a magician who grants him numerous enchanting wishes.

In 1965, Jackson died in her sleep, at her home in North Bennington, at the age of 48. Her death was attributed to a coronary occlusion due to arteriosclerosis  or cardiac arrest. She was cremated, as was her wish. In 1968, Jackson’s husband released a posthumous volume of her work, “Come Along with Me”, containing her unfinished last novel, as well as 14 previously uncollected short stories (among them “Louisa, Please Come Home”) and three lectures she gave at colleges or writers’ conferences in her last years.

In 1996, a crate of unpublished stories was found in a barn behind Jackson’s house. A selection of those stories, along with previously uncollected stories from various magazines, were published in the 1996 collection “Just an Ordinary Day”. The title was taken from one of her stories for The Magazine of Fantasy & Science Fiction, “One Ordinary Day, with Peanuts”. Jackson’s papers are available in the Library of Congress. In its August 5, 2013, issue The New Yorker published “Paranoia”, which the magazine said was discovered at the library. 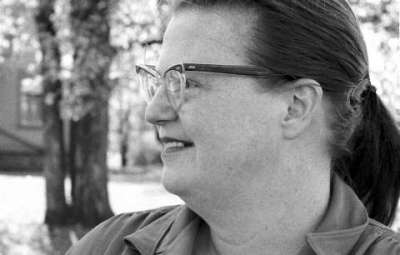 Two of her children, Laurence Jackson Hyman and Sarah Hyman Dewitt, have become editors for a collection of her unpublished works, Let Me Tell You: New Stories, Essays, and Other Writings. The compilation, released in August 2015, helps to mark the 50th anniversary of Jackson’s death.

Often relying on supernatural themes, she was known for tackling provocative, chilling subject matter that was culturally incisive and held metaphors for how people dealt with differences.

“I have always loved to use fear, to take it and comprehend it and make it work and consolidate a situation where I was afraid and take it whole and work from there.” – Shirley Jackson