As part of a sorority ritual, pledges and their male companions steal a trophy from a bowling alley; unbeknownst to them, it contains a devilish imp who makes their lives a living Hell.

I wish I could go back to a time when I was first discovering these 80’s Horror movies.

I have great memories from those days when all of these films were new to me, as I’m sure many of you do to. I don’t know if I’m the only one who does this but when I think about certain films that I enjoy I also remember where I first saw it and what was going on in my life at the time, the power of film.

Anyway, when I first watched this film I was living alone and I was on a discovery of low budget 80’s Horrors, I watched a lot of film during that time (hey, I had a lot of time to kill). The first thing that attracted me to this was the crazy title, you don’t see titles like that anymore. Secondly, it was a Full Moon Entertainment film.

With it being a Full Moon film I knew I was in for a fun time and with an insane plot and a great casting of Scream Queens Linnea Quigley, Brinke Stevens, Michelle Bauer all in the same film, what is there not to love?! I definitely wasn’t disappointed and when the credits rolled I was left with a big grin on my face.
Sure this film is as cheesy as it gets and it hasn’t exactly aged the best but it’s so full of what I call the ‘Full Moon charm’ that you can’t help but love it. To say this film was shot in just twelve days is an amazing achievement as well, that’s even unheard of for independent films these days. 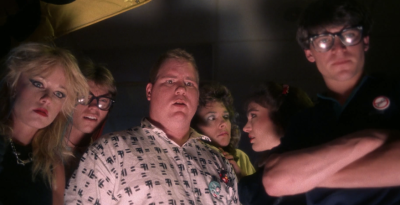 “Sorority Babes In The Slimeball Bowl-O-Rama” is what it is, it’s a slice of 80’s cheesy fun and it celebrates it. There have been rumblings of a sequel, I don’t know what to think of that yet, we’ll have to wait and see. But for now we have this fun feature to enjoy.
If you want to see the “Sorority Babes In The Slimeball Bowl-O-Rama” trailer then just click on the video below:
Miscellaneous facts about the film:
The budget was too low to rent the bowling alley during peak daytime hours, so the cast and crew had to wait till the bowling alley closed at 9pm and shoot all night till 9am.
Director David DeCoteau wanted to work with Linnea Quigley so much that he handed her the script and told her she could play any character she wanted. She eventually decided on Spider.
In Static-X’s song “I’m With Stupid”, Linnea Quigley’s line from the movie “Yeah, it was…very stupid.” is sampled.
This was the most popular feature shown on USA Up All Night with Rhonda Shear. The episode was co-hosted by star Linnea Quigley.
Shot in twelve days.
The script was written in 10 days with only one draft.
Producer Charles Band held a contest among the employees at Empire Pictures to come up with a new title for the movie, as he felt The Imp was no longer relevant. The title he chose was Bitchin’ Sorority Babes in the Slimeball Bowl-O-Rama, which the entire cast hated (except for Andras Jones, who loved it). Fortunately, the MPAA said they couldn’t use the word “Bitchin'” in a movie title and forced them to drop it.
The movie was released in the UK on VHS under its original title, The Imp.
Linnea Quigley suggested Hal Havins after having worked with him on Night of the Demons (1988).
Charles Band was so pleased with how David DeCoteau’s previous film, Creepozoids (1987), turned out that he offered him this film. He called him and said, “I have a movie that I need you to start working on yesterday.” He told him it was called “The Imp” and he already sold it based on the poster alone. Both the title and the poster were later changed.
The location for the sorority house was later used in two other Linnea Quigley movies: Murder Weapon (1989) and Linnea’s Quigley’s Horror Workout (1990).
John Stuart Wildman (Keith) was originally supposed to have a nude scene in the locker room, but then decided he couldn’t do it. David DeCoteau told him he would at least have to wear tighty whiteys, but then he showed up wearing boxers.
The janitor tells a story about a man named Dave McCabe. This was director David DeCoteau’s alternate name when he directed adult films.
The trophy, although appearing to be metallic, is actually made of balsa wood.
The sorority is Tri Delt (Delta Delta Delta) but the paddle is a Beta Theta Pi paddle. No explanation is given for this.
Andras Jones (Calvin) admitted to having a crush on Robin Stille (Babs) while filming.
Robin Stille wore the same wig in Vampire Knights (1988).
Michelle Bauer (Lisa) recalled that Linnea Quigley (Spider) was uncomfortable with her character’s frequent use of foul language and attempted (unsuccessfully) to leave out expletives during line readings.
The bowling alley wasn’t actually in the mall. It was an entirely separate location.
Hal Havins and Linnea Quigley also starred in Night of the Demons (1988)
Linnea Quigley told director David DeCoteau she knew how to ride a motorcycle. However he saw one of the crew members giving her motorcycle-riding lessons in the parking lot.