A Texas Ranger hunts for a hooded serial killer terrorizing the residents of a small town.
The 70’s was a great time for Horror, it was a time of originality and experimentation in film-making. “The Town That Dreaded Sundown” is a great example of it. 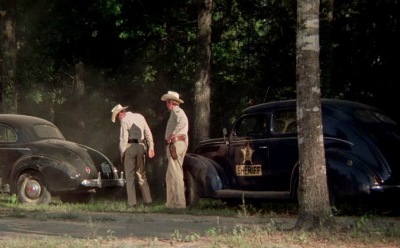 This movie is loosely based on the real-life string of mysterious killings that terrorized the people of Texarkana, Texas, in 1946. The murder spree became known as the “Texarkana Moonlight Murders”, the only description of the killer ever obtained was of a hooded man. To this day no one has been convicted and these murders remain unsolved.
One of my favourite elements of this movie is the narration done by Vern Stierman, it sets the films tone and it’s something I miss in modern Horror. It seems to be a lost art these days, I even miss it in trailers as it’s definitely an attention grabber.

Director Charles B. Pierce was a b-movie master and apart from the cult favourite “The Legend Of Boggy Creek” I consider this to be his best work, it’s low budget nature just gives it a more authentic feeling and Charles B. Pierce worked wonders with a limited budget.
It should come as no surprise that the film is being remade with  Alfonso Gomez-Rejon in the Directors chair, I’m not happy that yet another film is being remade. It’s apparently set in modern day so who knows how that will work, oh I got it, a copycat killer!

“The Town That Dreaded Sundown” is a great showpiece of it’s time and a feature that shows you that you don’t have to have a huge budget to make a great film. Be sure to watch the original before the remake gets released.
If you want to see “The Town That Dreaded Sundown” trailer then just click on the video below:
https://youtube.googleapis.com/v/JOTOxk1naC4&source=uds

Dawn Wells only worked for one and a half days.

According to the interview with Andrew Prine on the Region 1 Shout! Factory release, Prine had to write the ending for the movie because the script didn’t have an ending.

Cinematographer James W. Roberson had a broken foot when he shot this film.

Some of the swamp scenes at the end of the film are actually recycled footage from The Legend of Boggy Creek (1972), Charles B. Pierce first feature film.