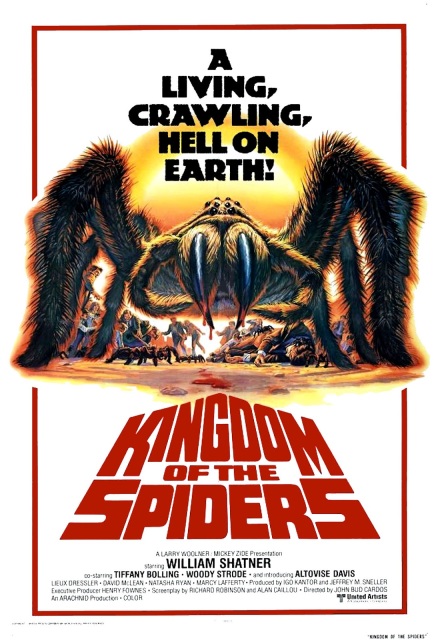 In rural Arizona, countless killer tarantulas are migrating through a farm town, killing every living thing in their path. The town’s veterinarian will do everything in his power to survive the onslaught.

I’ve been watching quite a few 70’s Horrors lately and I stumbled upon this release and realised that I’d never actually watched it, I decided it was time to change that.

I have to admit that I was initially wary of this film, surprisingly it had nothing to do with the fact that it’s subject matter is killer spiders as spiders have never really bothered me. In fact it was actually because of William Shatner, the thing is he does nothing for me, I usually get irritated by his over acting.
I was happy to see that in this film he played a more laid back role and he didn’t go all hammy on us, even during the action scenes where you’d most expect it. It was great to see him act in a more reserved manner and he actually shows that he has more range in him than the aforementioned hammy parts that he’s renowned for.

One thing I love about this film is that it’s like someone wrote a TV soap script and then during a reading someone in a corner said “It’d be better if there were killer spiders in it”. Well it worked, you have a good story that builds characters and once things get going that foundation is there, something that seems to be a lost art.
I have to say that the films soundtrack had me smiling, talk about eclectic, but hey it works. This film is what I call a great film for a lazy Sunday afternoon viewing. It also features a cracking ending that really sideswiped me, I won’t say anything else about it but woah, I loved it.

“Kingdom Of The Spiders” is a fun film, I wish I’d have watched it years ago. I will warn you though, if you don’t like spiders then you’d be best to steer away from this film, no matter how cheesy it may seem.
If you want to see the “Kingdom Of The Spiders” trailer then just click on the video below:
Miscellaneous facts about the film:

50,000 dollars of the movie’s budget went towards spiders. The producers offered to pay ten dollars each for live tarantulas, and handlers collected 5,000 of them.

Tiffany Bolling was cast in the female lead role because she was the only actress who auditioned who had no trouble working with spiders.

Donna Mills auditioned for the female lead, but couldn’t do it because she was uncomfortable with spiders.

The film crew painted thousands of fake spiders on buildings along the main business district in Camp Verde, AZ, to give the impression of a large swarm of spiders. After the production wrapped they hastily repainted the town without much attention to detail. For several years afterwards the stenciled tarantulas were still easily visible on the lighter colored buildings in Camp Verde, hidden only by a thin coat of cheap cover-up paint.

A sequel was planned to be released by 21st Century Film Corporation in the late 1980s/early 1990s but was never made. William Shatner was attached to return and was also set to direct.

Contrary to popular belief (and in the film), the venom of most tarantulas is not dangerous to humans, causing no more harm than a bee sting (unless the person is allergic to the venom). The worst injury most of the actors suffered while handling the tarantulas was troublesome itching caused by the spiders shedding their urticating bristles.

Jon-Jon, who plays the injured boy covered with spiders during the tarantulas’ assault on Camp Verde, is the son of director John ‘Bud’ Cardos.

William Shatner initially did not want to do the film, but John ‘Bud’ Cardos personally visited Shatner at his house, and convinced him to take the role.

The large amount of tarantulas kept on-hand led to some unusual production difficulties. Not only did each spider have to be kept warm, but because of the creatures’ cannibalistic tendencies, all 5,000 spiders had to be kept in separate containers. Additionally, tarantulas are usually shy around people, so fans and air tubes often had to be used to get the spiders to move toward their “victims”. Indeed, in a number of the scenes where the tarantulas are “attacking” people, it is obvious to the viewer that the spiders are merely moving around, usually away from their intended victims.

The bulk of the score was film library music, which was largely made up of music cues by Jerry Goldsmith from various episodes of The Twilight Zone (1959).

Though Altovise Davis (wife of Sammy Davis, Jr.) is listed as “and Introducing,” this was actually her third movie–she played a deputy in Welcome to Arrow Beach (1974), and a co-worker of Gladys Knight in Pipe Dreams (1976).

In a nod to the movie’s low budget, in the scene where the Baron crashes his cropduster into Earl’s garage, the people outside of the station when it happens are not stuntmen. Rather, they are stars William Shatner, Tiffany Bolling, Hoke Howell, and some extras.

Bo Svenson was offered the lead role, but turned it down.

Riffed by the guys from MST3K under the Rifftrax name, Michael J Nelson, Bill Corbett and Kevin Murphy.